Govt to appeal against removal of Shahbaz’s name from blacklist

* PTI’s fight against rotten system continues: Fawad
* ‘If Yasmin Rashid can get treated in Pakistan, why not Shehbaz?’ asks Fawad 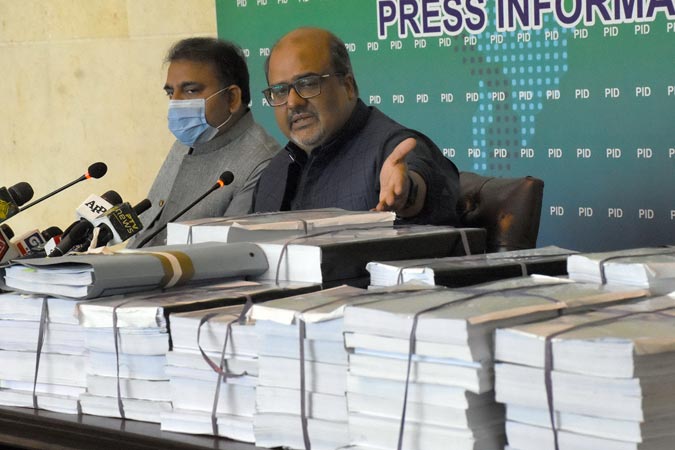 Advisor to the Prime Minister on Accountability and Interior Barrister Mirza Shahzad Akbar on Sunday said the government would file an appeal against a recent Lahore High Court’s verdict in which it granted conditional permission to Leader of the Opposition in the National Assembly and PML-N President Shehbaz Sharif to travel abroad once for medical treatment.

Addressing a news conference along with Minister for Information and Broadcasting Chaudhry Fawad Hussain, he said the court was not properly assisted in the case and sufficient grounds were available to challenge the verdict. Shehbaz Sharif’s name exists in the Provisional National Identification List (PNIL), which is separate from the blacklist.

Castigating PML-N leadership,he said they were misleading the people that Shehbaz’s corruption has not proved and hoped that the Sharifs would have to answer their large scale plundering.

Addressing the news conference, the Minister for Information and Broadcasting Chaudhry Fawad Hussain said in a democratic setup the government had not unlimited powers and it had to take steps within the ambit of law and constitution.

Fawad said the decades-long rotten system prevailed in the country and the Pakistan Tehreek-i-Insaf (PTI) government since its inception had been striving to change it.

The minister said from 1985 to 1999 and 2008 to 2018 two families had ruled the country, and the Sharif brothers were one of them, who had built properties abroad by plundering national wealth during their rule.

Prime Minister Imran Khan, he said, had no personal enmity against the Sharif family. His fight was against the corrupt system and he wanted the return of plundered national wealth, the minister added.

Fawad said it was not the PTI government but a German newspaper, which had published the news of corrupt rulers, also known as the Panama Papers Leaks.

The common point in the Panama Leaks, he said, was that the rulers of poor counties had misused the national resources and purchased properties in the rich countries.

He said Nawaz Sharif owned four apartments in London, each worth 45 million pounds. A child born in the Sharif family owned a house in the British capital even before his birth, he remarked.

Fawad said it was now time to decide whether it was the fight of Imran Khan only or that of the entire nation. Both the judiciary and the prosecution had to play their role in rooting out corruption from the society.

As a political party, he said, the PTI had played its role as the people accepted its narrative and voted for Imran Khan.

He said the superior judiciary had given historic verdicts in the corruption cases. However, there were many issues which needed to be settled as the system had not changed so far.

The way Shehbaz Sharif was granted bail in a hasty manner was the manifestation of an obsolete system in the country.

Punjab Health Minister Dr Yasmeen Rashid, he said, was sick and needed more urgent medical attention than Shehbaz Sharif, but she was in the forefront in the fight against coronavirus. If she could get medical treatment in Pakistan, then why did Nawaz Sharif and Shehbaz Sharif, who ruled the country for decades, could not be treated here, he asked.

He questioned as to whether it was not the responsibility of Nawaz Sharif’s sons to come to Pakistan and face charges of corruption and money laundering.

Thousands of prisoners languishing in various jails, he said, also had rights and the relief given to Shehbaz Sharif to go abroad for medical treatment was injustice to them. There was an impression that the powerful got scot free by breaking the web of justice while the weak remained trapped in it.

Such decisions would make the common man think that the law was not the same for the powerful and the weak segments, he added.

Fawad said the PTI government fully respected the judiciary but it would avail all legal options against the verdict allowing Shehbaz Sharif to go abroad. Who could guarantee that Shehbaz Sharif would return as he himself (Shehbaz) had given guarantee for Nawaz Sharif’s return who was now absconding in the United Kingdom, he asked.

Even the opposition parties, he said, considered Nawaz Sharif an absconder as Asif Zardari had demanded his return before the launch of any movement.

The minister said last time Shehbaz Sharif availed bail on the pretext of back pain and went to the UK, but he was seen running on the roads of London.

Replying to questions, Fawad said Prime Minister Imran Khan was the only national leader as all the opposition leaders were confined to regions. The PTI was only party which contested the general election from Punjab, Sindh, Khyber Pakhtunkhwa, Balochistan, Gilgit Baltistan and Azad Jammu & Kashmir.

He acknowledged that the Pakistan Muslim League-Nawaz and Pakistan Peoples Party had won recent bye-elections, but popularity of any party could only be judged in the general election. The PTI was the only party which could could field candidates in all parts of the country.

To a question, he said the Federal Government’s stance was very clear that it did not want to let Shehbaz Sharif go abroad till all the cases against him were taken to their logical conclusion.

He said there was no personal vendetta of the PTI or its government behind the cases against the Sharifs (initiated by the previous regimes) . It was rather the fight of masses against corruption, which the PTI government was waging. Nawaz Sharif and Maryam Nawaz had already been convicted and the others would also face the same fate as all the cases would be taken to their logical conclusion .