* Meets Secretary General of the Organization of Islamic Cooperation 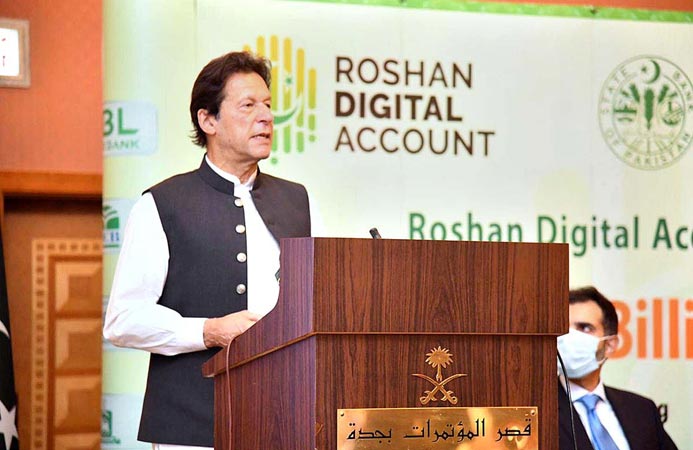 Prime Minister Imran Khan Sunday said the country was passing through a decisive moment and the struggle against corrupt mafia and status quo would succeed soon, leading to the Naya Pakistan.

Addressing a gathering of Pakistani community at a ceremony held here in connection with the Roshan Digital Account, the prime minister said his government’s struggle was driven mainly for the establishment of rule of law in the country.

“It is a decisive moment, the old status quo and the mafia were resisting and trying to save themselves. But the public supported my party and the government in the struggle for rule of law,” he added.

Imran Khan said the difference in societies was based upon – the one which had rule of law and the other governed by ‘might is right.’

The system based upon humanity survived and ensured prosperity whereas the rule of jungle led to nowhere, he added.

“Those countries prospered where there is rule of law and justice,” he stressed.

The prime minister said the corrupt elements had been united in their efforts to save their skins.

“No one can stop this change, due to the mass awareness. Social media has brought a change as information travels very fast. The youth and social media have been the main ingredients of our party’s success,” he opined.

Imran Khan said the struggle continued for that Naya Pakistan, which had been envisioned by its founder Quaid-e-Azam Muhammad Ali Jinnah and which must have been realized many years back.

Due to his government’s efforts for the Naya Pakistan, the country was rightly back on track and on path to its real destiny, he added.

Appreciating the role of about nine million overseas Pakistanis in the country’s prosperity, he said they possessed huge potential and had been the biggest asset.

Their potential was not fully tapped and no efforts were made in the past to pursue them to invest in the country, he added.

The prime minister said the country’s economy was being stabilized as they had passed through the most difficult times with consistent strengthening of its reserves.

He mentioned that the government was making efforts to further offer the overseas Pakistanis different products like the Roshan Digital Account because the world was changing at fast pace with the use of latest technology.

After the Covid-19 pandemic, the prime minister said the fragile economies were devasted worldwide. In the neighbouring country, India, daily caseloads were increasing at alarming level.

Pakistan, he added, was among the few countries, which had navigated in the COVID scenario with much difficulty. Its exports were on the rise and the economy had recovered. The economic indicators were showing improvement.

The construction industry, he said, was providing jobs and the low-cost housing imitative would provide housing facilities to low-income groups. Prior to it, there was no concept of such housing facility in Pakistan, the government was slowly and gradually unfolding such facilities, he added.

Earlier, State Bank of Pakistan Governor Reza Baqir informed the ceremony that so far, more than 100,000 accounts had been opened under the Roshan Ddigital initiative.

He said the country’s current account was now in surplus, with reserves surged to over 16 billion dollars.

Highlighting the rise of Islamophobic incidents in different parts of the world, the Prime Minister stressed the importance of a concerted response from the OIC. It was noted that following the Prime Minister’s letter addressed to Heads of State of Muslim countries, the OIC Council of Foreign Minister (CFM) in Niamey had adopted a unanimous resolution on observing 15 March as International Day to Combat Islamophobia.

The Prime Minister emphasised that it had to be a collective endeavour of the Muslim leadership to make sure that the world recognised the special love and reverence that Muslims had for the Holy Prophet (PBUH). Secondly, it was imperative not to allow anyone to create any linkage between Islam and terrorism. The Prime Minister called upon the international community to show a common resolve against intolerance and incitement to violence on the basis of religion or belief and work together for inter-faith harmony and peaceful co-existence.

The Prime Minister strongly condemned the Israeli attack against Palestinians in Qibla-e- Awaal, the Al-Aqsa Mosque, and reiterated his call on the international community to take steps to protect the Palestinians and their legitimate rights. The Prime Minister also called upon the OIC to play its rightful role in addressing the serious situation.

The Secretary General shared information with the Prime Minister on the OIC’s activities in support of the Jammu and Kashmir dispute. The OIC has steadfastly supported the Kashmir cause and in this context the Niamey CFM culminated with a comprehensive resolution on the issue.

The Prime Minister and Secretary General discussed Pakistan-OIC collaboration on a range of issues. The Prime Minister stated that Pakistan was looking forward to hosting the 48th Session of the Council of Foreign Minister.