‘Here Today’ Review: Bill Crystal, as a Comedy Writer Losing His Memory, Meets Tiffany Haddish in a Lively Movie With a Soft Center 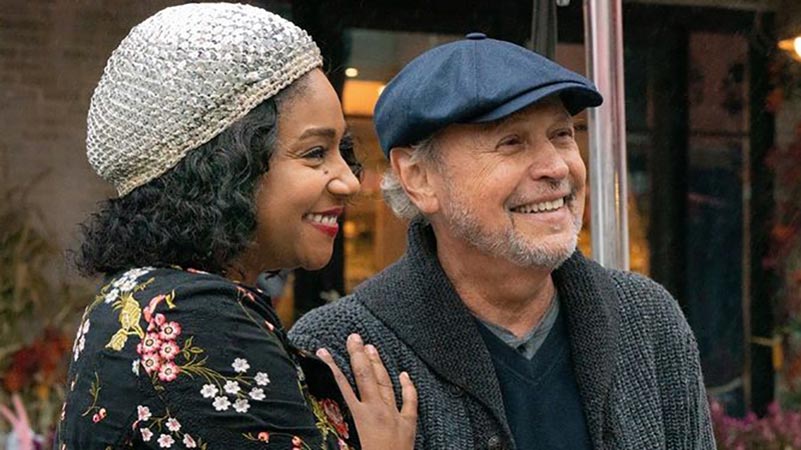 “Here Today,” starring Billy Crystal as a venerable TV comedy writer and Tiffany Haddish as the saintly, rough-around-the-edges street singer who becomes his unlikely pal, is a movie that feels like it could have been made 30 years ago: a friendly, adult-skewing, tart-witted but never nasty, jokes-and-hugs-built-around-a-serious-crisis character study that’s just ’90s enough to be comfortably old-fashioned, like an old pair of tasseled loafers. What’s good about the movie is that Crystal, who co-wrote and directed it, has an inside knowledge of the showbiz comedy world (as he demonstrated in 1992 when he directed and starred in the acerbically accomplished “Mr. Saturday Night”), and the prickly vivacity with which he portrays it roots the movie in something real.

Crystal’s Charlie Burnz lives in a beautiful Brooklyn brownstone and walks each day to the cable-television studio where he’s the senior writer on “This Just In,” a popular sketch-comedy show that’s like “Saturday Night Live” done for Comedy Central. It’s always gratifying to see the comedy world captured by someone who doesn’t feel the need to satirize it too broadly, and Crystal, who co-wrote the script with the former “SNL” writer Alan Zweibel (based on Zweibel’s short story “The Price”), nails how a show like this one works: the neurotic electricity in the writer’s room, the jockeying between laughs that aim high and aim low, the performative office politics of who’s up and who’s down.

At first, when we see Charlie surrounded by hip New York sketch writers 30 years his junior, or seated in his office typing up jokes on his bath-tile-green manual Smith-Corona, we suspect that the movie is going to be about a relic who gets tossed out of a comedy establishment that’s outgrown him. But Charlie, who has Broadway plays, hit movies, and five books to his credit, hasn’t lost the instinct for how to spin a joke, and for what he calls the “music” of comedy. He’s the show’s mentor, its organizing editor, its tribal elder. What he’s losing is his memory.

Each day, on his walk to work, he fixates on the same stop sign and tells himself to turn left. At home on the wall, he’s got photographs of his adult children, the menschy Rex (Penn Badgley) and the resentful Francine (Laura Benanti), with Post-It notes of their names attached. Most of the time, though, his mind is fine: perky, nimble, compulsively funny. Crystal makes Charlie a worldly spieler — someone who has spent his life winning people over with one-liners, driven by a show-off abrasiveness that has been softened by success. As Crystal plays him, with a scraggly beard and a gentle aging-boomer edge, Charlie is an intensely likable guy, but the names from his past are starting to slip away from him. As we learn early on, during a meeting between Charlie and his doctor (Anna Deavere Smith), it’s not information overload. He’s in the early stages of dementia. He’s hiding it for the moment, but it’s only going to get worse.

Charlie keeps having weirdly vivid flashbacks, usually to moments with his wistful late wife, Carrie (Louisa Krause), which the film plants us right in the thick of. And what he’s going through is dramatized in a terrific scene set at Lincoln Center, where he appears onstage for the 30th-anniversary tribute to “Call Me Anytime,” a rom-com classic he wrote 30 years ago. It’s a movie that comes right out of that ’90s sweet spot; onstage with him are the film’s director, Barry Levinson, its two stars, Sharon Stone and Kevin Kline, and the moderator, Bob Costas (all four playing themselves). Charlie keeps asking Barry who he is, which the crowd takes as a joke, and when he says the same thing to Sharon Stone, it’s obvious to them that he must be joking. But he’s not. And the laughter freezes in our throats.

It’s hard to watch “Here Today” without thinking, at moments, of the battle against mental deterioration that was waged, and lost, by Robin Williams. It’s not that this is some “version” of that story, but Williams’ ordeal shadows it: the spectacle of a brilliant comedian, a man with a pinwheel brain, losing touch. That said, “Here Today” is no movie-of-the-week. It’s a comedy in which Charlie’s increasingly desperate attempts to hold onto who he is put him on a rocky collision course with his job and his family.

What inspires him to go forward is his flowering friendship with Tiffany Haddish’s Emma, who won a lunch with him (actually, it was her ex-boyfriend who won it; she’s never heard of him). During the lunch, in which it’s quickly established that the two have nothing in common, she suffers an allergic reaction to her seafood salad and gets rushed to the hospital. She has no insurance, so Charlie, who can afford it, picks up the rather sizable tab for her meds and several other expenses.

She shows up to repay him, and they become pals. Why? Because that’s the motor of the movie. She calls him “old man” and ribs him relentlessly; he goes to see one of her musical performances (and sees that she’s got something). Mostly, though, this is a sentimental buddy comedy, with a trace of romantic feeling that never translates to anything literal (though the two do, at one point, spoon). Haddish kicks off her role on a note of high abrasiveness, then grows more and more mellow with every scene. She has a warmly appealing, star-burst presence, but even as Emma’s music career gets sparked to life, we can’t help but notice that she isn’t given any real drive as a character except to hang around and help Charlie. The idea is that she brings some soul into his life, and there’s at least one scene where that gets a bit cringe-worthy: He takes her to the bat mitzvah of his granddaughter, Lindsay (Audrey Hsieh), and Emma gets the stodgy party rockin’ with her rendition of Janis Joplin’s “Piece of My Heart.” This is the kind of feel-good moment that may make you glad the ’90s aren’t around to make you feel so good anymore.

Much better is the scene where Charlie loses it during the live broadcast of “This Just In.” He’s developed a fulminating obsession with one of the cast members, who has a way of saying the simplest phrases with the wrong emphasis, and during the show’s equivalent of Weekend Update, Charlie charges on camera, going into a tirade — it’s at once a mad-as-hell “Network” tantrum, an honestly funny comedy scribe’s complaint, and an incipient dementia breakdown. Crystal plays it with a force that reminds you of why he became such a hilarious and winning actor.