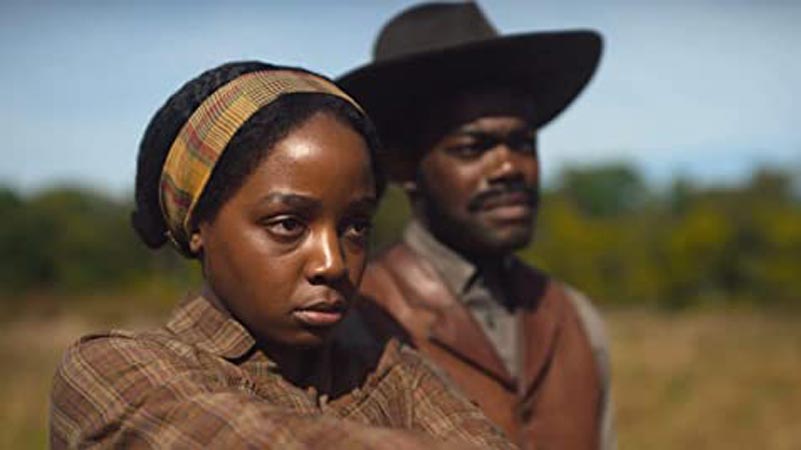 Every single frame of “The Underground Railroad” is haunted. Ghosts of horrors past, present and future linger at the story’s edges, flicker in and out with eerie ease. People alive, dead and somewhere in between stare into the camera with quiet, solemn clarity. Whispers fade into the background, sharing terrible secrets as urgent prayer. In adapting Colson Whitehead’s novel to the television screen,

The entirety of “The Underground Railroad” — 10 episodes altogether, most running at least a full hour — will be available upon its May 14 premiere on Amazon Prime, but that is a mistake. The series is dense enough that each episode would, and should, stand on their own with enough space for viewers to digest it before moving on to the next. Instead, Amazon is releasing all of them in one fell swoop, making it far too easy for someone to muscle through too much without reprieve, or else shy away from the show entirely should it get too challenging. It’s hard not to imagine how “Underground Railroad” would fare if it were to unfold weekly, giving each installment a more lasting spotlight.

If you do blaze through the series, you might as well take the advice of one of its conductors. As he helps runaway slave Cora (Thuso Mbedu) into an underground freight train — Whitehead’s invention that makes the historical euphemism for the South to North escape network vibrantly literal — the conductor sees her incredulous expression and tips his hat. “Just look out at the sides as you speed through,” he says, “and you’ll see the true face of America.”

Over the course of her incredible, awful journey, Cora becomes a reluctant living witness to America’s worst ills, only slightly reimagined by Whitehead for emphasis. She begins as a cotton picker in Georgia, subject to the whims of her sadistic master (Benjamin Walker) whose name she bears. Her mother Mabel (Sheila Atim) was one of the only runaway slaves for miles who ever truly got away from career slavecatchers like Ridgeway (Joel Edgerton), escaping in the dead of night when Cora was still a child. Mabel looms large over Cora’s story, a mythic and strange figure in her daughter’s furious, determined mind.

From Georgia, Cora runs with Caesar (Aaron Pierre) to South Carolina, where a seemingly civilized utopia reveals its rotten foundation. In North Carolina, Cora tucks herself away in an attic with Grace (Mychal-Bella Bowman), another exhausted stowaway, because the entire state has outlawed Black people unless they’re hanging from trees as a warning. Tennessee is a gnarled wasteland of burning brush while Indiana is its tantalizing opposite, too green and good to be true. The dread of each state and the unbearable lessons they teach Cora are unique unto themselves, terrible and true.

As with any work of adaptation, it’s fascinating to understand where Jenkins and his writers saw fit to linger versus what they decided to slim down from the page to the screen. Realizing that the Carolinas each only get a single episode is initially confusing, but these chapters end up being two of the show’s smartest, maybe because they had these limits. Other sections — like Cora’s trek through Tennessee and a lengthy flashback to Ridgeway’s youth, of all people — could have used the same editorial eye. It makes sense that Jenkins would have wanted more time than a film could have allowed to tell Whitehead’s story, but the organization of these ten episodes end up making an argument for eight. With each new state, community and enemy, Cora learns the visceral price of American racism as it chips away at her resolve and everything she loves, or could love if given a real chance to. Without the inside perspective Whitehead’s novel affords Cora by telling the story largely through her eyes, Mbedu has an astonishingly difficult job in conveying the nuances of her thoughts throughout the series, which does lose some of her prickly pragmatism as portrayed in the book. .