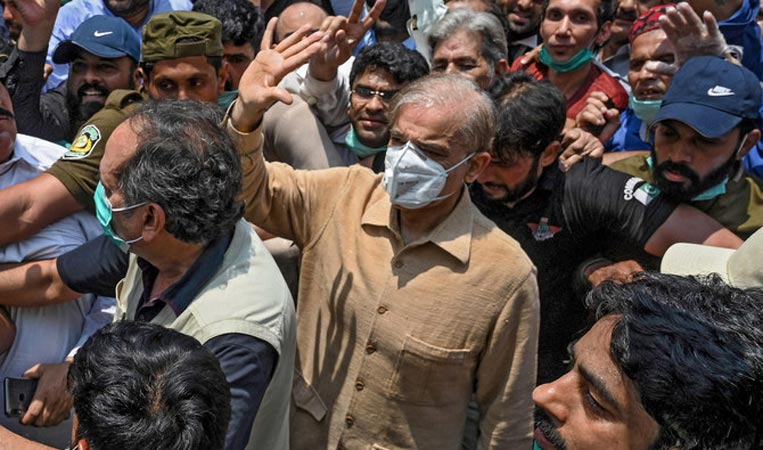 Pakistan Muslim League-Nawaz (PML-N) President and Leader of the Opposition in the National Assembly Shahbaz Sharif was not allowed to fly from the Lahore airport to the United Kingdom on Saturday morning after the Federal Investigation Authority (FIA) said his name was on “another list”, which prevented him from leaving the country.

Earlier on Friday, the Lahore High Court (LHC) granted Shahbaz conditional permission to travel abroad once for medical treatment.
Shahbaz, who is a cancer survivor, was scheduled to leave for Doha from Lahore. After spending some days in quarantine in Doha, he had planned to fly to London to consult his doctors.

But as he showed up to the airport, he was that told he cannot board the plane.

Speaking to the media on Saturday, PML-N spokesperson Marriyum Aurangzeb said that two FIA officials were present in court when the LHC issued the order allowing Shahbaz to travel abroad. The court order also mentioned the flight number that the PML-N president would take to fly to Qatar, she added.

Calling it “malafide” intention, Aurangzeb also said that the present government’s priorities were focused on “Shahbaz Sharif” and political opponents instead of providing electricity, water, sugar and wheat to the people.

She claimed that Information Minister Fawad Chaudhry and Adviser to Prime Minister on Accountability and Interior Shahzad Akbar had been issuing statements saying they “did not accept” the order and they would make “complete efforts to stop Shahbaz”.

She questioned what the government could gain from stopping Shahbaz from travelling abroad, stressing that the government would have to answer. “They know the public has rejected them whether it is in Daska, Wazirabad or Karachi. This is why they have resorted to such petty actions.

Information Minister Fawad Chaudhary, however, clarified that the inclusion or exclusion of someone’s name in the blacklist was the prerogative of the FIA director-general. He said that the legal counsel of Shahbaz Sharif had given no application to DG FIA for removal of name from list, which is the standard procedure. He also said that the record could not be changed by verbal statements and that the government would file an appeal in court against this decision.

Yet speaking alongside Aurangzeb, PML-N leader Ataullah Tarar claimed that there were “two Pakistans” – one where the prime minister could “get his special assistant Zulfiqar Bukhari’s name removed from the ECL in 1.5 hours” and the other one in which the system was not updated despite a court order. “Shahbaz Sharif’s name was not on the ECL after which NAB went to the Supreme Court to get [the PML-N president’s] name put on the ECL but was rejected. Following this, the NAB-Niazi nexus tried to put Shahbaz’s name on the blacklist. There is a list called the ‘person-not-in-list’ which is illegal and a dirty tactic through which a person can be temporarily stopped from flying abroad”.

He too termed the addition of Shahbaz’s name to the PNIL as a violation of the LHC order. When the high court is giving permission to travel abroad, then the Ministry of Interior and FIA have “no legal basis” to stop Shahbaz Sharif this way, Tarar said.

In a tweet on Saturday, he said that Lahore High Court ordered removing the name of Shahbaz from blacklist only once. How the decision will be implemented is a legal issue and it would have been better if all stake holders and facts could be taken on board, he added.

Akbar had apparently briefed PM Imran Khan about proof against the Sharif family being irrefutable because of the availability of documented evidence. Akbar apparently also expressed surprise that they are still managing to get off the hook. The government’s actions since the court verdict are meant to dispel any impression that it is part of some deal with certain opposition figures. For PTI, there is no question of a deal and it is pretty much business as usual. How this turns out remains to be seen.

Yet the prime minister is not happy about these latest developments and is holding the head of the Assets Recovery Unit answerable for them. He must now explain what exactly has been going wrong. So far the government’s legal team is blaming the judicial system for results that don’t suit them, but the PM is not buying this argument. Physical assets are undeniable proof, after all, so why are they not being pinned to the Sharifs when they have been clearly caught breaking the law, the PM is said to have asked.