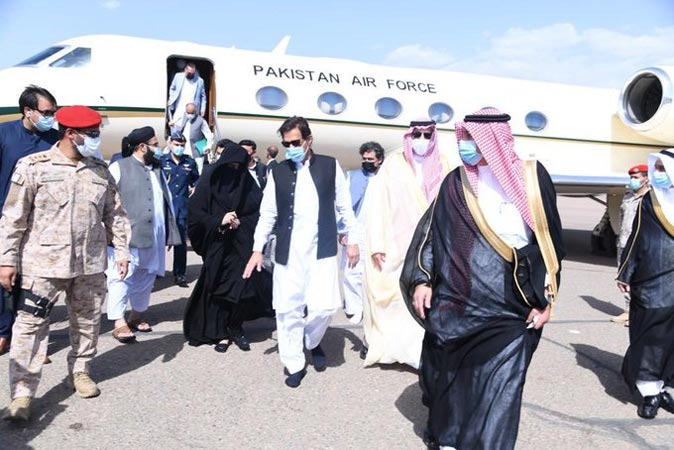 Prime Minister Imran Khan on Saturday paid his respects at Roza-e-Rasool (Peace be Upon Him). The prime minister along with his delegation broke fast (Iftar), offered Namaz-e-Maghrib, nawafil and prayed at Masjid e Nabvi (SWA).

Minister for Information and Broadcasting Chaudhry Fawad Hussain also shared an image of the arrival of a barefoot Prime Minister Imran Khan along with his wife Bushra Imran in Madina Munawwara on his Twitter handle. Along with the image, the minister in a tweet (in Urdu) said a servant ( Imran Khan) had come to pay his respects to Holy Prophet Muhammad (Peace Be Upon Him) in such a manner that he did not walk in his city (Madina Munawarra) with footwear what to talk of the Roza-e-Rasool (SAW). Fawad quoted an Urdu verse ” Adab pehla qareena hai muhabbat ke qreenon men”.

Earlier, upon his arrival in the Holy City, the prime minister was received by Governor of Madina Munawara Prince Faisal bin Salman. Special Assistant to the PM on Political Communication Dr Shahbaz Gill and SAPM on Interfaith Harmony Maulana Tahir Ashrafi were also present.