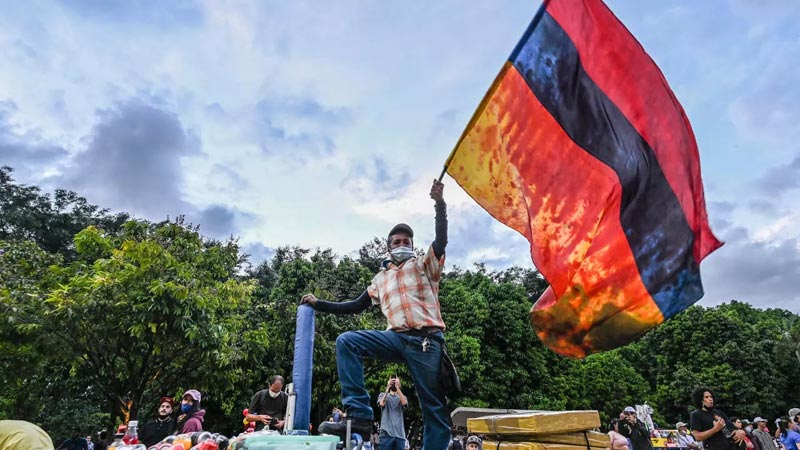 Facing anti-government protests that have spiraled into deadly violence, Colombian President Ivan Duque is holding a series of talks with his political foes in search of a way out of the crisis.

The right-wing leader — whose approval rating is just 33 percent — has faced occasional mass protests since taking office in August 2018. But the current unrest has quickly bubbled into an open challenge to his administration just over a year before his term ends.

After meeting on Friday with members of the opposition, Duque tweeted that it was “a great opportunity for dialogue, overcoming differences and without political point-scoring.” On Saturday, the president plans to meet with young people, followed on Monday by talks with protest leaders, including the National Strike Committee.

But some of the young protesters AFP spoke to were skeptical that dialogue could resolve their grievances.

“I feel that there cannot be a dialogue when one side speaks and is killed,” Laura Ramirez, a 17-year-old nursing student, told AFP during a demonstration in the capital Bogota. There can only be genuine discussions, she said, “when the people are respected and listened to.”

Triggered by a now abandoned tax reform, the nationwide demonstrations have drawn thousands of pandemic-weary Colombians to the streets, venting their anger over poverty, yawning inequality and the government’s harsh response to the protesters.

While the rallies have been mostly peaceful, some have morphed into deadly clashes with security forces that have left at least 26 people dead by official count. Reports of police abuses, sexual violence and disappearances have only fueled further unrest. Colombians abroad have also added their voices to the fray, demonstrating in front of diplomatic missions in Peru, Uruguay, Argentina and Spain. “I feel a lot of sadness, anger, pain, helplessness,” Gisselle Ríos, 35, told AFP from Barcelona. “They are killing our youth, there are massacres every night by the police.”

Duque has also expressed a willingness to sit down with the Unemployment Committee, which brings together several of the dissatisfied sectors. “We are in a position to listen to them, and also to listen to all of them … those who protest, those who do not protest,” he told the press.

The organization said it would only sit down to talk if the government agreed to discuss a list of several demands, including police reform, a basic income of $250 for the poorest and the demilitarization of towns and cities. The defense ministry has deployed more than 47,500 uniformed personnel in response to the protests.

While demonstrations have rocked cities across the country for 10 straight days, roadblocks have choked deliveries of food, fuel and medicine, driving up prices.

Supplies of oxygen and other medical equipment have required military protection to get through as the country battles its latest coronavirus wave. Duque said such blockades — 733 of them by his count — were not justified, though he defended the “legitimate right” to peaceful demonstration. “Yes to conversation, yes to building, but definitely no to roadblocks,” he told reporters. “The roadblocks are not peaceful, they are affecting the rights” of citizens, he said.

While the president expressed his “pain” for the victims and pledged “zero tolerance” for abuses, his government has also blamed the violence on old enemies, including left-wing rebels and drug traffickers.

Colombia has however come under fire for its handling of the protests and especially the deployment of forces heavily armed after decades of conflict with paramilitaries and guerrillas. Human rights groups have recorded much higher fatalities than the official toll, including NGO Temblores, which has reported 37 deaths and 275 victims of physical violence.

Demonstrators have set fire to buses and police stations, while three members of the security forces have been shot. As night fell Friday, an armed attack on a medical mission in Cali left at least “three seriously injured,” Natali Gonzalez, the mayor’s undersecretary for human rights, told AFP.

The European Union and the United States have urged security officers to exercise restraint, while the United Nations has expressed shock over reports of excessive force. On Friday, Secretary General of the Organization of American States Luis Almagro condemned the cases of “torture and murder committed by the forces of order” in Colombia. Venezuela also denounced a “massacre” of Colombians. In response to the onslaught of international criticism, the Colombian government said there was an effort to discredit its security forces. “There’s a stigmatization campaign against the public forces operations on social media that aims to pit them against society,” Defense Minister Diego Molano told Blu Radio.