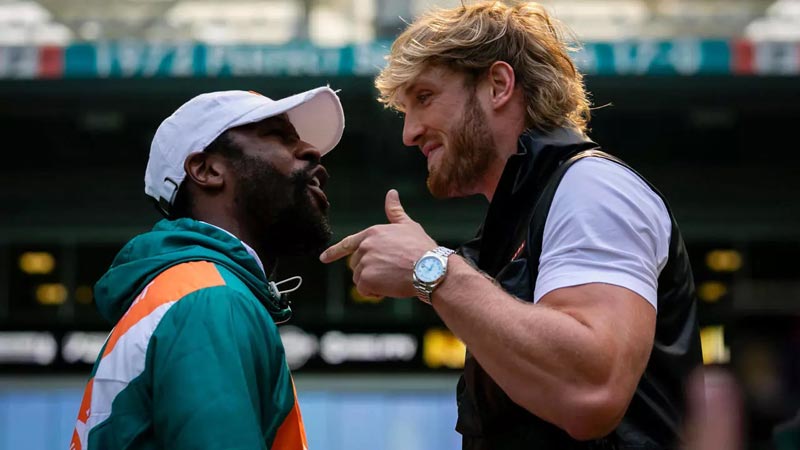 Floyd Mayweather has untold riches, private jets, yachts and mansions yet the desire to entertain remains.

The 44-year-old, undefeated former welterweight world champion is preparing to make a return to the ring next month with an exhibition fight against Internet personality star Logan Paul at Miami’s Hard Rock Stadium on June 6.

Mayweather should in theory have no need to don gloves again after a boxing career which by one estimate saw him earn more than $1 billion.

But he told reporters on Thursday that he is not content to sit back and let his retirement years roll on by.

The prospect of a lucrative payday against Paul — a 26-year-old novice who has fought just twice, both against a fellow Youtube celebrity — proved irresistible.

Details for the fight remain shrouded in mystery. As yet it is not known how many rounds the contest will feature, or what gloves the Paul and Mayweather will use.

Mayweather sees the event as an opportunity to make “crazy” money, even if his claims of a potential nine-figure purse are plainly fanciful.

“I’m retired from boxing,” Mayweather told AFP. “My record is 50-0. But I just want to have fun and to go out and make nine figures. I think I am a smart businessman.

“There’s a lot of champions who have got legacy, but no currency. It’s great that I’m able to go out there and make a crazy payday.

“I think people think retirement is just being at home, with your feet kicked up, gaining weight.

“No, that’s not what I want to do. I want to have fun, travel the world and just enjoy life …

“People want to be entertained. All people have been talking about is Covid and vaccines. Let’s get back to entertaining the people and having fun.”

The irony was not lost on the American fighter that as Saul ‘Canelo’ Alvarez, the Mexican superstar whose only defeat came against the man known as ‘Money’ in 2013, was preparing for his fight this weekend in front of an estimated crowd of 70,000 in Arlington, Texas, all the headlines had been grabbed by chaotic scenes in Miami which saw Mayweather clash with Logan Paul and brother Jake.

“He was 23 and I was 36 when we fought,” said Mayweather of Alvarez. “Look at me when I was 23. “I was a monster. No fighter in history could have beaten me. No-one could beat me at any age.

“I had my time but out of all the great fighters, who beat more world champions than anyone in 50 fights? They talk about the attendance for Canelo’s fight. But with 17,000 people in the MGM Grand in Las Vegas, I generated $73 million in two minutes when my tickets sold out.

“You can talk about Sugar Ray Robinson or this guy did this, or he did that. Nobody did it like Floyd Mayweather.