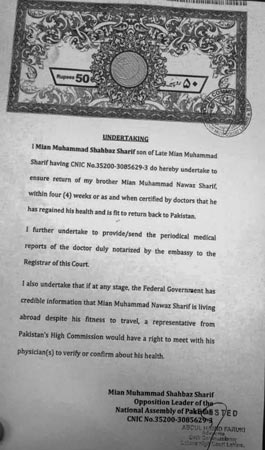 Justice Ali Baqar Najafi passed the orders on a petition filed by Shehbaz Sharif for removing his name from the blacklist. The court allowed Shehbaz Sharif one-time visit to United Kingdom from May 8 to July 5 for medical check-up. Presiding over the hearing, Justice Ali Baqar Najafi also directed the government and the Federal Investigation Agency along with the director-general of Immigration and Passports to submit a report to the court on or before the next hearing. “Dispensation sought for is allowed subject to all just and legal exceptions. Keeping in view the past conduct and travel history, the fact that name of the petitioner is not in Exit Control List (ECL) at the moment, the name of the petitioner in blacklist, if already placed, will not stop the petitioner from one-time visit to UK from May 8, 2021, to July 3, 2021 for his medical checkup as per his personal commitment made before this court,” said the interim order. Earlier, the court had reserved the verdict after hearing arguments of the parties.

Advocate Amjad Pervaiz on behalf of Shehbaz Sharif argued before the court that his client was arrested in connection with Ashiana and Ramzan Sugar Mills cases in 2018 but he got bail in February 2019. However, his name was put on the exit control list and it was removed on direction of the LHC, he added. He submitted that Shehbaz Sharif was scheduled to visit consultant in connection with his treatment in London but his name has now been put on the blacklist. He argued that step of putting his client’s name on the blacklist was illegal as he had not been served any notice.

Later, the law officer stated that he could not get instructions as the offices had closed. He pleaded with the court for fixing the matter after Eid holidays. However, the court adjourned further hearing till 2.00pm and summoned Shehbaz Sharif.

The court addressed the law officer and questioned whether he thinks that Shehbaz Sharif would not return or the government needs any guarantee. He remarked that the petitioner had gone abroad and then came back in the past. However, the law officer submitted that he needs some time for consultation as officials have gone due to long holidays. The law officer also read out an affidavit given by Shehbaz Sharif while leaving with Nawaz Sharif to London earlier. He also pointed that Shehbaz Sharif was main accused in the money laundering case and the trial court is recording statements of witnesses in the case.

At this, the court questioned whether trial court proceedings would be affected if Shehbaz was allowed to go abroad. The court also questioned Shehbaz Sharif about emergency of going abroad. Shehbaz submitted that he is a cancer survivor and he receives treatment from New York and London for it. “I have been advised regular check-up from Dr Martin but it was suspended for some time as I was behind the bars,” he said, and submitted that he needs urgent treatment in the light of tests conducted in jail. He assured the court that he would return immediately on completion of treatment.

Advocate Amjad Pervaiz also submitted return ticket of Shehbaz Sharif booked for July 3. Subsequently, the court reserved its verdict on the petition on completion of arguments of parties. Later, the court conditionally allowed Shehbaz Sharif to travel abroad in view of assurance given by him and also sought reply from respondents till July 5. Separately, PML-N leader Ahsan Iqbal’s name has been added to the exit control list by the interior ministry. The former federal minister is accused of causing losses worth billions to the national exchequer by initiating the Narowal Sports City Complex project in his home constituency.