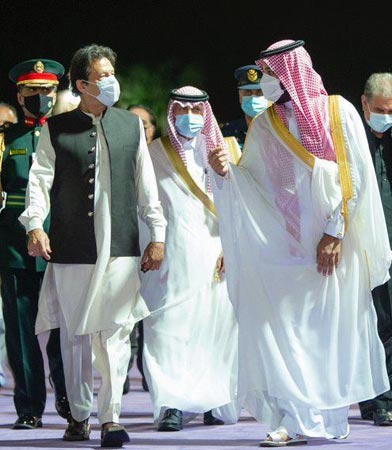 Prime Minister Imran Khan reached Saudi Arabia late on Friday night for a three-day official visit on the invitation of Saudi Crown Prince Mohammad bin Salman, who himself received the prime minister at the Jeddah airport.

After a warm welcome at the airport, the prime minister headed to the Royal Palace along with Foreign Minister Shah Mahmood Qureshi, Interior Minister Sh Rashid Ahmed and Chief of Army Staff General Qamar Javed Bajwa. Later the delegation-level talks started at the Royal Palace, which were continued till filing of this report. The consultations were to encompass all areas of bilateral cooperation including economic, trade, investment, energy, job opportunities for Pakistani workforce, and welfare of Pakistani diaspora in the Kingdom.

Pakistan and Saudi Arabia are set to sign several memoranda of understanding (MoUs) in trade and other important areas during the prime minister’s visit. The two sides will hold delegation-level talks to discuss areas of bilateral cooperation.

According to the Foreign Office, during his stay, the prime minister will meet the Secretary-General of the Organization of Islamic Cooperation (OIC) Dr. Yousef Al-Othaimeen, Secretary-General of the World Muslim League Mohammad bin Abdulkarim Al-Issa and the Imams of the two Holy Mosques in Makkah and Medina. He will interact with the Pakistani diaspora in Jeddah. The prime minister will perform Umrah in Makkah and pay his respects at the Roza-e-Rasool (Peace be Upon Him) in Madina Munawwara.

In an article authored by prime Minister Imran Khan published by Arab News, he said that Pakistan and Saudi Arabia have long-standing and historic fraternal relations, rooted deep in common faith, shared history and mutual support. He said that the people of Pakistan hold the Custodian of the Two Holy Mosques in the highest esteem. “Our relationship is marked by close cooperation in all fields and we look forward to further strengthen this equation especially our economic ties for our mutual benefit,” he added.

The prime minister further said that the kingdom has a key role in unifying the Muslim Ummah as it is the home to the two holiest cities for Muslims across the world. Pakistan highly valued this role that Saudi Arabia has consistently been playing, the premier added.

“One of the key challenges faced by Muslims today is Islamophobia,” he said. “It is imperative that the Muslim world takes a united stance against the rising tide of Islamophobia and we all make concerted efforts to sensitize the West about our deep respect for our Holy Prophet (Peace Be Upon Him) and our sensitivities about our religion being linked with terrorism.”

Imran Khan also appreciated various landmark initiatives taken by the visionary leadership of Saudi Arabia. One that requires a special mention was the ‘Saudi Green Initiative’ and ‘Green Middle East Initiative’, he added.

The prime minister said that the threat that climate change posed to this planet and our region was real and it was high time for action. “Pakistan has already initiated Clean and Green Pakistan and Ten Billion Tree Tsunami,” the PM said. “We believe that our priorities and goals in this regard are aligned and we can therefore learn a lot by sharing experiences. Pakistan will extend every possible support toward the success of the Green Initiative.”