Prime Minister Imran Khan’s comments about Pakistani missions abroad seem to have whipped up quite a storm and left much of the foreign service pretty unhappy. The problem began only a couple of weeks ago when information regarding mistreatment of expatriate Pakistanis in Saudi Arabia forced him to recall the ambassador, along with six other staff members, from the embassy in Riyadh. Then, shortly afterwards, when addressing envoys posted in 19 countries via video link, he chastised them for harbouring a “colonial mindset” and made it very clear that he had noticed “shocking callousness” in their attitude towards the expatriate community.

This much seemed to have been taken pretty well by most Pakistanis who heard and read about it in the news, especially those who are residents of other countries. Because it is not even an open secret that most Pakistanis that have any sort of dealings with our embassies in any corner of the world usually come back unhappy and dissatisfied. And the fact that the PM himself was trying to set this thing right was largely seen as something to celebrate. But that’s not how the foreign office, or anybody related to or retired from the foreign ministry, sees it.

Serving officers haven’t gone on record about it, which is understandable considering the restraints that government servants face about revealing things about their jobs to the press, but retired foreign secretaries have taken the lead in trying to confront the PM’s accusations and setting the record straight at least as far as how they see it. They, in turn, hold the government responsible for anything that goes wrong because embassies face “acute resource constraints,” in the words of Tehmina Janjua, and much of the work that concerns expatriates does not fall within the purview of the foreign ministry to begin with. Most of their queries and concerns, especially if they are about passports and ID cards, are the responsibility of the interior ministry.

So what was meant to clear the air in terms of the functioning of our embassies has only caused further confusion; no matter how unintended it was. You can now expect the opposition to play its usual part in this business and muddy the waters even more, even though this rot would never have set in our embassies if they had been more vigilant during their own times in government. Hopefully this matter will not cause any more worries. Whichever ministry is responsible for people’s unwarranted suffering in other countries needs to pull its socks up and it is the government’s duty to make sure that the reforms that are needed are carried out. And the foreign ministry, for its part, would do itself and everybody else a huge favour by putting its own house in order instead of trying to brush all criticism of its carelessness under the carpet. * 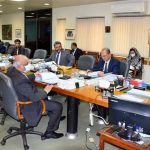