Nation can’t prosper with ‘island of rich amidst sea of poor’: PM 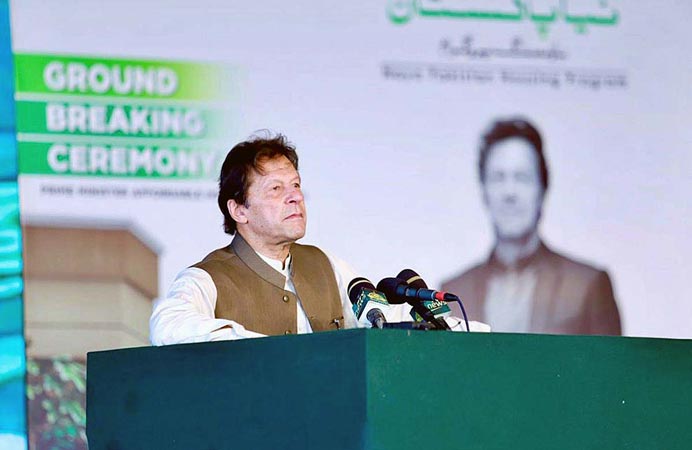 Prime Minister Imran Khan on Thursday said the government is focusing on equitable distribution of resources among the rich and the poor by ensuring basic amenities of life for all.

“The notion of elite capture and the prevailing mindset that Pakistan belongs to a particular class only is regrettable,” he said in his address at the launch of Punjab Peri-Urban Housing project for low-income groups. “No nation can prosper with an island of rich and a sea of poor,” he said, and regretted that during last 74 years, only a particular elite ruled the country. He said the elite-centric policies inflicted huge damage upon the poor whose access to civic facilities including health, education and jobs greatly suffered.

The prime minister said his vision is to make powerful answerable to law and strengthen the weaker segments of society. He said Islam’s first socio-welfare State of Medina was a model to be emulated where rule of law and justice prevailed regardless of the status of a person. He pointed that opposition wanted an NRO from him to spare their corruption, however their all such efforts would go in vain. He said political elite in the past patronized illegal land grabbing that led to litigation and obstructed development work.

Imran Khan said the government has launched several affordable housing schemes for low-income groups, adding that construction industry is resulting in economic boom in the country. As construction sector is connected with 30 other industries, he said, the step will help resolve the problems of accommodation and unemployment. He mentioned that the recently cleared foreclosure law of banks greatly helped in materializing the low-cost housing schemes.

The prime minister said ill-planning of infrastructure and encroachment in cities were leading to civic problems including poor sanitation, pollution and mushroom growth of slums. He said a plan to equip slums with basic amenities was on cards and vowed to give ownership rights to the slum-dwellers.

Imran Khan said Pakistan is blessed with areas having spectacular natural beauty, adding that proper tourism strategy could earn the country huge revenues. He said the government was focused on bringing a revolution in agriculture sector and mentioned that he was personally overseeing the area to facilitate farmers. He said during last two years, the farmers were given an additional payment of Rs 11 billion and the yields of wheat, rice and corn witnessed a record production.

The prime minister mentioned that Pakistan was also undergoing development in information technology with a record exports of equipment in 11 years.

On Covid-19, the prime minister appealed to the public to observe standard operating procedures to contain the dangerous wave of pandemic and stressed to continue the use of face mask as a crucial precaution. “The next two weeks are very significant and our target is to bring down the coronavirus cases,” he said, adding that the situation in India is a lesson to learn from.