complete lockdown in Punjab from May 8 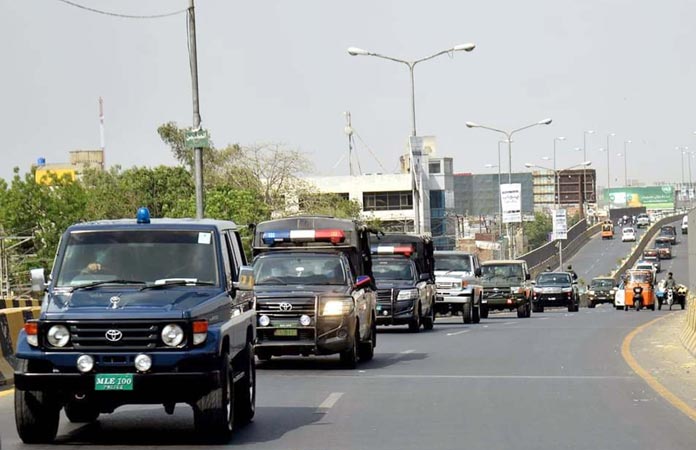 Punjab government on Wednesday decided to impose a complete lockdown from May 8 to restrict public movement due to the consistent rise in novel coronavirus cases.

Provincial government took the decision during a session under the chair of Punjab Health Minister Dr Yasmin Rashid to mull over steps for curbing the coronavirus. It has been decided to restrict the public movement by imposing a ban on public transport and tourist spots across the province.

The provincial authorities will establish check post on the entrance and exit routes of the cities where police, Rangers and army troops will be deployed.

Dr Yasmin Rashid said that 15 to 20 days are very important to contain COVID-19 and asked citizens to support the government steps besides exhibiting responsible behaviour by adopting precautionary measures.

She appealed to citizens to celebrate the Eidul Fitr festival with simplicity as additional holidays were announced to restrict the public movement. The chief secretary said that the people should be made aware of the precautionary measures and asked citizens to avoid unnecessary travelling during Eid holidays. Following the National Command and Operation Centre (NCOC) orders, all parks and tourist spots will be closed due to the Covid spike, he added.

Dr Yasmin Rashid maintained the vaccination process is continued across Punjab and more COVID-19 vaccination centres will be established to facilitate the citizens. More than 1 million people were inoculated so far.

The health authorities have also made HDU beds in Expo Centre functional and more beds were allocated in private teaching hospitals for the free-of-cost treatment of coronavirus patients. Dr Rashid added that the government is also considering purchases of oxygen and generators for COVID-19 patients.

The national tally on Wednesday of total active COVID-19 cases recorded 84,480 with 4,113 more people tested positive for the deadly virus and 5,665 people recovered from the disease during the last 24 hours.

One hundred and nineteen corona patients have died during past 24 hours, 106 of whom were under treatment in hospital and 13 out of the hospital in their respective quarantines or homes, according to the latest update issued by the National Command and Operation Centre (NCOC).

During the past 24 hours, most of the deaths have occurred in the Punjab followed by Khyber Pakhtunkhwa.

Out of the total 119 deaths occurred in the last 24 hours 38 of them had died who were under treatment on ventilators.

Around 676 ventilators were occupied elsewhere in the country while no COVID affected person was on ventilator in Gilgit Baltistan (GB) and Balochistan.

Around 738,727 people have recovered from the disease so far across Pakistan making it a significant count with over 90 percent recovery ratio of the affected patients.

About 18,429 deaths were recorded in country since the eruption of the contagion. Around 4,687 have perished in Sindh among six of them died in hospital and three out of the hospital on Tuesday.

A total of 12,010,519 corona tests have been conducted so far, while 631 hospitals are equipped with COVID facilities. Some 5,741 corona patients were admitted in hospitals across the country.