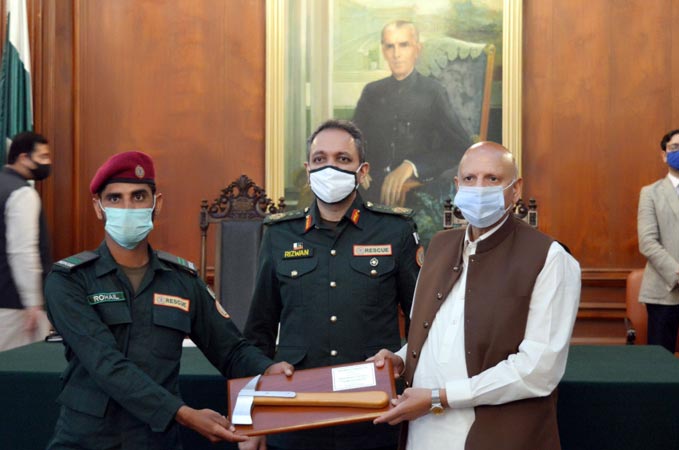 The Governor of Punjab Chaudhary Muhammad Sarwar acknowledged & paid rich tribute to the firefighters who sacrificed their lives in the line of duty while rendering their services to protect precious human lives and properties of the citizens. The bravery of all firefighters who have died in the course of their duties was remembered with a minute’s silence held at Governor House Punjab here on Tuesday. A special prayer was also offered for their highest place in Jana. Governor Punjab also paid rich tributes to family of Shaheed firefighters and said the services of all these Shaheed Fire Rescuers have been written in the history with golden words. He reiterated that the services of all these Fire Rescuers are footsteps for their colleagues.

At this occasion, Governor Punjab said that in order to start the Fire and Rescue Service in Pakistan, he arranged the training of Rescue officers in Scotland during his tenure as Scottish parliamentarian. Rescue Officers trained as master trainers replicated at Emergency Services Academy which resulted the launch of first Modern Fire & Rescue Service in 2007 from Lahore.

Ch Sarwar said that Rescue 1122 has shifted over 18000 confirmed and suspected covid-19 patients to quarantine centers/ hospitals. The Rescue Service has also performed burial over to 3000 with corona SOPs in all districts of Punjab. Moreover, Rescue 1122 distributed over 50,000 food hampers through its rescue Scouts to deserving people during COVID-19 surg. At the end, he appreciated the services of Dr Rizwan Naseer and his entire team who faced many challenges in their way to achieve the goal. He also wished that we all should continue a struggle for progress of our country.

Speaking on the occasion, DG Emergency Services, Dr Rizwan Naseer thanked the Governor Punjab for support to start and strengthen Fire and Rescue Service in the country. He paid rich tribute to Shaheed Rescuers and congratulated the best rescuers of the year 2020. He said Rescuers are our heroes who risk their lives to save others’ lives and properties. All rescuers should continue their job with commitment to serve humanity without discrimination. He highlighted that today Rescue Fire Service has responded over to 158,000 fire incidents in Punjab during last 13 years & saved losses worth of Rs490 billion. Not only Rescue 1122 has set highest service delivery standards in field of fire but also become the first United Nations certified Team in South Asia. This certification is an honor for all citizens of Pakistan.