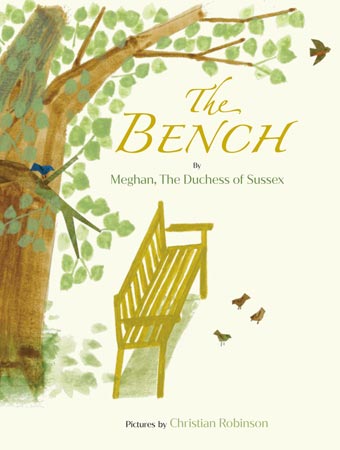 Meghan Markle today announced she has written a £12.99 children’s book called The Bench, which is inspired by Prince Harry and her son Archie and comes illustrated with pictures of a red-headed soldier. The Duchess of Sussex, 39, said the book – which will come out in the UK and US simultaneously – was inspired by a poem she had written for Harry on Father’s Day the month after Archie was born and would explore the ‘special bond between father and son’ as ‘seen through a mother’s eyes’. The story, which will be published on June 8 by Random House Children’s Books, will be illustrated by bestselling Californian artist Christian Robinson, who was brought up by his grandmother in a one-bedroom flat also shared with his brother, two cousins and aunt. A publicity release said Meghan, who chose to use her title on the cover of the book, wanted the story to be told through an ‘inclusive lens’ and will feature a ‘diverse group of father and sons’.