Electoral reforms: 49 amendments being made to Election Act, 2017

* Babar Awan says changes being made to facilitate use of electronic voting machines, ensuring right to vote to overseas Pakistanis
* Elected legislator will have to take oath within 60 days or his seat will be declared vacant 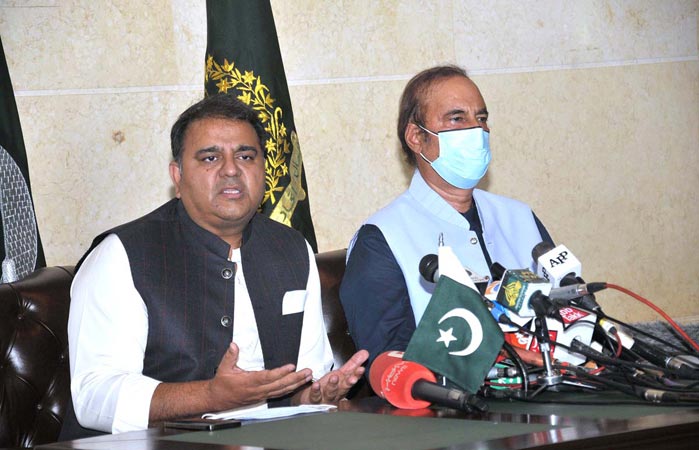 Advisor to Prime Minister on Parliamentary Affairs Dr Babar Awan Monday said the incumbent government is committed to bringing electoral reforms in the country to ensure free, fair and transparent elections in the future.

Addressing a presser along with Minister for Information and Broadcasting Fawad Hussain Chaudhry, he said Prime Minister Imran Khan has directed to bring improvement in the electoral laws in given circumstances and 49 changes are being made in the Election Act, 2017 by introducing or abrogating sections and making amendments in the existing sections.

He said the Elections (Amendment) Bill was introduced in the National Assembly on October 16, 2020 and opposition did not attend the session on the day. He said the speaker had constituted a special committee for consideration on the new proposed laws but opposition was not ready to discuss them. He said parliament is the only forum to discuss and ensure improvement in laws but opposition unfortunately had not taken serious its various bodies including standing committees, House Business Advisory Committee and special committee constituted by the speaker.

As per directions of the prime minister, Awan said, civil society organizations, All Pakistan Newspapers Society, Council of Pakistan Newspaper Editors, Bar Councils, Bar Associations, press clubs and other relevant stakeholders would be taken on board on the issue of electoral reforms and talks would be held with them.

Moreover, he said two constitutional amendments would be introduced in the parliament aiming to conduct Senate elections through identifiable voting and allow overseas Pakistanis to contest elections. He also highlighted few sections of the Election Act, 2017 for the amendment. He said Section 103 of the said Act would be amended to ensue use of electronic voting machine (EVM) and system to be exhibited before the relevant stakeholders.

He said another relevant section would be amended for right to vote to overseas Pakistanis. The Section 202 about enlistment of political parties would also be amended and a political party would have to submit a list of at least 10,000 members with their signatures or thumb impressions along with copies of their computerized national identity cards (CNICs) and enlistment fee. A new Section 213-A would be also added in the Election Act, 2017 making compulsory for the registered political parties to hold their annual convention.

He said Section 15 of the Elections Act, 2017 was also being amended which was regarding complaints against polling staff. This new amendment would enable the contesting candidates to challenge the appointment of polling staff within 15 days.

Awan said an elected member of federal or provincial legislatures would have to take oath within 60 days after his/her election as per suggested amendment otherwise, the seat would be declared vacant. He said more financial autonomy was also suggested for the Election Commission of Pakistan.

Minister for Information and Broadcasting Chaudhry Fawad Hussain said that the government wants to introduce modern technology in the electoral process to end the controversy of rigging once and for all. “Free and transparent elections are a prerequisite for democracy and use of electronic voting machines is a means to achieve this target,” he said while addressing the press conference. He recalled that Prime Minister Imran Khan was the first captain in the international cricket who pleaded to introduce neutral umpires in cricket. He said after neutral umpires and introduction of new technology, the controversy of umpires’ biasness has ended.