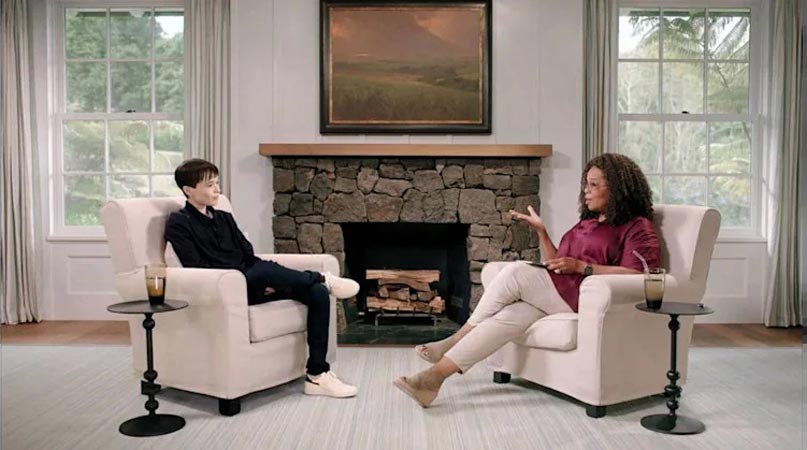 Elliot Page says his decisions to transition and undergo top surgery have been not just “life-changing” but “life-saving.”

The Umbrella Academy star spoke with Oprah Winfrey, on AppleTV+’s The Oprah Conversation, in his first TV interview since coming out as transgender. The Oscar nominated actor, whose pronouns are he/him and they/them, talked about the extreme discomfort he felt in his body all of his life and how it was magnified having to dress up in gowns on red carpets, leading to depression, anxiety and panic attacks. He now feels “comfortable in my body for probably the first time” at age 34. During the interview he shed “tears of joy.”

Page said the “horrible backlash” towards trans people, and particularly trans youth, made him realize it was “imperative” to share his truth, which he first did publicly in a letter posted to social media in December.

“With this platform I have, the privilege I have, and knowing the pain and the difficulties and the struggles I faced in my life, let alone what so many other people are facing, it absolutely felt just crucial and important for me to share that,” he said.

Page said spending time alone in Nova Scotia during the pandemic — and at the end of his marriage to dancer Emma Portner, from whom he filed for divorce in January — forced him to really “sit with myself” and examine “certain aspects that I had never given myself the opportunity to” look at because he had been “avoiding” it. He recalled relaxing, connecting with nature and, most importantly, his body.

He told Winfrey he had to overcome his own fears — as trans people are a huge target of hate crimes — to share his truth. But he knew it was worth it, explaining, “I don’t know how to really say it other than it feels more important [to be out as transgender] “than feeling scared in moments. It feels more important than if I have an overwhelming day. To me, it really simply feels like the right thing to do.”

Page was the first transgender man to land a solo cover of Time magazine, in March. In that cover story, he spoke about the discomfort he felt in his body as a child — and talked more about that with Winfrey. He recalled in pre-school asking his mother, “‘Can I be a boy when I grow up?’… I was definitely: No, I’m not a girl. I knew that immediately.”

He spoke about being able to get a short hair cut at age 9 and the “gender euphoria” he experienced when people thought he was a boy, describing it as “exciting and exhilarating” when someone called him Alan. He also spoke of borrowing boys swim trunks for an impromptu dip at a friend’s house at age 10 and how good it made him feel for a moment, noting, “I was just living my best life.”

He called puberty “total hell,” with changes bringing “profound discomfort in my body,” leading to a “disconnection” with it. Being cast in female roles as his star rose and having to change out of his “tomboy” clothes into feminine wardrobe physically “made me feel ill.”

Juno, in 2007, made Page a huge star — and while the accolades were wonderful, having to parade on red carpets in dresses caused him deep pain. He broke down in tears discussing attending the 2008 Oscars.

“I could not look at a photo from that red carpet,” he said because the discomfort of the dress, heels and glam that went into it — along with the hair and makeup. “That was a pretty intense time,” he admitted. “It felt so impossible to communicate with people how unwell I was because obviously there is so much excitement” yet he was in “pain” inside.

He said promoting 2010’s Inception — with all the premieres and press events — led to a collapse.

“I was wearing dresses and heels to pretty much every single event,” he recalled. While readying for the Paris premiere, and being shown multiple designer dresses he had to pick from, “I lost it… I collapsed. That was something that happened frequently in my life, usually corresponding with a panic attack. I’m sure the two correlate and that whole period correlates.”

He said it was the feeling of, since he was a toddler, being told, “‘The way you’re sitting, that’s not ladylike.’ ‘The way you’re walking, you’re walking like a boy.’ … Every single aspect of who we are constantly being looked at and put in a box in a very binary system. That’s what it leads to,” he said of his collapse.

The X-Men star said coming out a gay woman in 2014 gave some “relief,” because he could finally express his love in public, but he still fought the discomfort not feeling at peace in his body. He recalled periods in his life, like after reading trans activist Janet Mock’s book Redefining Realness, that he experienced “a moment that was just like: I’m trans.” However, “It was as if I took the thought and shoved it away. I wasn’t ready.”

Hiding from that truth led to “periods where I feel like I barely was existing… [Times] I didn’t even want to leave my apartment. It was really hard for me to be social with people.” And it impacted his work because “as an actor playing a character, it was being way too detrimental for my mental health wearing feminine clothing. I think it was hard for people to understand: Oh, you’re an actor. If you’re doing that photo shoot and you have to dress up feminine, just pretend it’s a role. Those aren’t the roles for me.”

Page said speaking his truth has been “an incredible sensation” which “keeps unfolding,” noting, “I feel like I haven’t gotten to be myself since I was 10 years old.”

He also spoke about his decision to share that he had top surgery, a surgical procedure to remove breast tissue, which he said has resulted in “moments of joy” and “euphoria in my body” that he never had before. It’s given him “energy” and, for the firs time, he’s able to “look at myself in the mirror and feel good about what I see.”

“I wanted to share with people just how much it has changed my life,” he told Winfrey. “Not only has it been life-changing for me, I do believe it’s life-saving — and it’s the case for so many people. And because there’s such an attack on trans health care right now, when already there’s such lack of access or trans people who don’t even want to go to the doctor. What you are hearing from certain lawmakers are actual complete and utter — they’re lies.”

He continued, “The reality of the health care is that it’s supported by medical institutions and it saves lives. If you are going to do this and if you are also not going to allow trans kids to play sports, children will die and it really is that simple.”

He said all the anti-trans legislation is to “erase trans people,” adding, “They don’t believe we exist and they don’t want us to exist.”

Page was asked what he finds the most joy in these days — and he said it’s “getting out of the shower and the towels around your waist and you’re looking at yourself in the mirror and you’re just like: There. I. Am. I’m not having the moment where I’m panicked… It’s being able to touch my chest and feel comfortable in my body for probably the first time.”

Wiping away a tear he called it. “Tears of joy.”