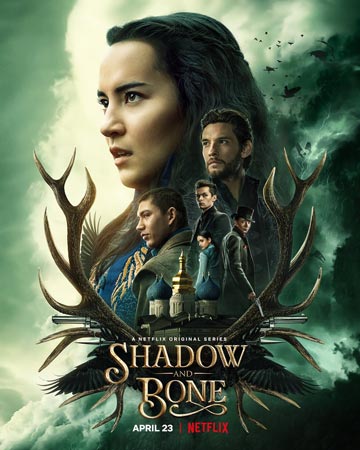 If you’re looking for another fantasy series to spend at least eight hours with, Netflix’s Shadow and Bone, streaming now, will hit the spot.

With tons of action, magic and teen angst, it’s peak young adult viewing — to a fault.

Multiple storylines can be hard to keep track of, not to mention intricate fantasy world details. Adapting Shadow and Bone from Leigh Bardugo’s Grishaverse series, plus throwing in characters from another of the series in Six of Crows, the show packs so much into its eight episodes that for once, runtimes aren’t bloated enough. Still, with endearing characters, brought to life by a large, inclusive cast, ‘Shadow & Bone’ is a sure-fire hit. Admirably ambitious, even if its moving parts don’t totally come together.

In the Russia-inspired land Ravka, a stretch of monster-ridden terrain known as the Shadow Fold threatens magic and non-magic nations. At the centre is Alina Starkov, a young soldier and orphan who just wants to survive and stay close to her best friend Mal.

Mostly related events take place across the fantasy map: Con artists Kaz, Inej and Jesper chase lucrative and not-totally-legal gigs, one of which sets them on a course to intersect with Alina.

While occasionally it feels like you’re watching two different shows, it’s clear whose story is the main focus. Alina discovers her Chosen One abilities and rises up the ranks of the magical Grisha, warriors who can bend the elements to their will. Her prophecy? Take down the menacing Shadow Fold.

Magical powers training with mentor Madam Hooch herself Zoë Wanamaker is satisfying if you’re after the predictable beats. If not, Kaz, Inej and Jesper’s attempts at outwitting their criminal counterparts for the biggest pay day are welcome interjections, especially with a charismatic performance from Kit Young. Their exploits provide surprisingly brutal action, along with a stretch in the high-threat Shadow Fold. Sadly, opportunities for more genuinely tense moments there are left behind early on.

Adding another welcome grey area is Ben Barnes’ General Kirigan, aka the shadow-manipulating Darkling. Alina’s counterpart in the magical Grisha army, Barnes teeters on grandiosity, but becomes more magnetic and morally ambiguous as the series goes on.

It’s Alina whose lack of ambition weighs events down. Often reacting to others around her, Alina reluctantly accepts her hero fate. Head writer Eric Heisserer, who wrote the Oscar-nominated screenplay for Arrival, peppers flashbacks to Alina’s poor childhood with best friend Mal throughout the episodes. While her connection with Mal is authentic, her parents’ disappearance in The Fold only highlights her strange lack of urgency with bringing about its demise.

Other characters like Grisha Nina and her captor Matthias Helvar, from a nation that despises magic, seem set up only to become more significant in future seasons. Another misstep sees an uncomfortable romance between characters of vastly different ages, seemingly an easy element to tone down.

After recent Netflix fantasy series like Cursed, production values appear strangely lacking. While the Grisha look striking in their long embroidered coats against the gritty war-torn Ravka, few other world-defining features immerse you in its fantasy land. For non-book readers, a Lord of the Rings-style map would have helped clear up the names of locations and show where each party is in relation to the other. Still, aside from at least one moment of clunky CGI, Alina’s light-related abilities and Kirigan’s wisps of shadow sear cool images into the screen.

It’s strange: You almost want Alina to take a back step and let the darker side characters shine. Yet it’s thanks to their wild card additions that Shadow and Bone stands apart from the packed ranks of young adult viewing. A promising start.

Shadow and Bone is out now.