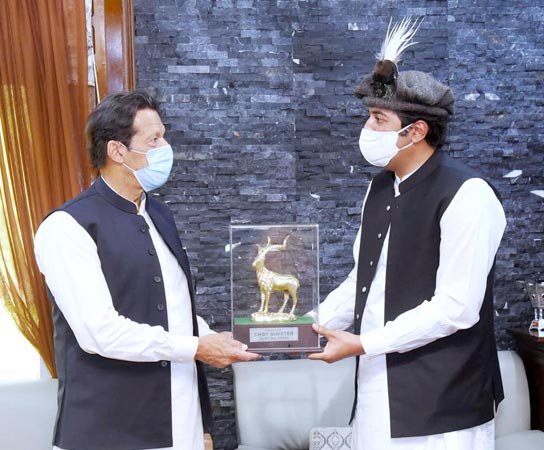 “This Rs 370 billion package for five years is just a beginning. We will be assisting you more as you require. I predict, if you properly take care of tourism, you will no more need money from federal government, rather we will seek funds from you. You cannot imagine as how blessed you are,” the prime minister said while addressing a ceremony here during his day-long visit to the region.

The prime minister, who earlier unveiled plaques to inaugurate and kick off multiple projects under the development package, said he had been awaiting such a package for GB. He said despite financial constraints owing to huge debt burden, the federal government has scraped Rs 370 billion package for GB with whom he has an association since his school age.

He said having visited Austria and Switzerland, he has found GB as the most beautiful region in the world, also admitted by his foreigner friends. Even those who went through his pictorial book “Indus Journey” the people in Pakistan and abroad were stunned to see the beauty of Pakistan.

The prime minister said the previous rulers showed blithe lack of concern towards GB’s development as they used to visit London for vacations where they had their children as well as properties. However, he said the PTI government decided to exploit the potential of the region particularly in tourism.

He told the gathering that the GB was an attractive destination for both summer and winter tourism. In summer, it will attract the locals while for winter, it was a suitable site for skiing which was also a major revenue source for Switzerland too. However, the prime minister repeatedly instructed the GB government not to compromise the town planning and environmental protection while executing the projects as it could prove counterproductive. He said as the area remained disconnected, it helped the locals build a good community system which would also help the enforcement of bylaws for tourism as well as town planning.

Calling it another step towards provincial status, Imran Khan said the incumbent government had decided to let the GB government make its own decisions doing away with a decades old practice of overseeing the affairs from Islamabad. He said an impression was created that the GB people were incapable to run their affairs which provided an excuse of controlling the affairs from the federal capital.

The prime minister viewed that a society lacking rule of law could never prosper. He said the people involved in petty financial crimes only inflicted loss to individuals but the big plunders caused damage to whole country through money laundering which consequently caused inflation and poverty.

He said otherwise inactive since last two decades, the National Accountability Bureau (NAB) had started going after big criminals during the PTI government. He said the country was faced with corrupt mafia but was confident to say that he had been ‘trained to defeat them’.