* It is one of a number of smaller, less crowded holiday resorts that have been listed as the nation's favourites for a staycation visit 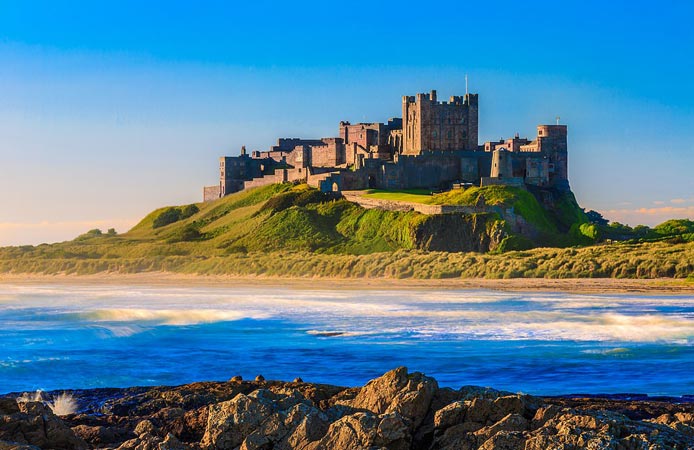 Bamburgh, in Northumberland, with its vast sandy beach and castle view, has been named the country’s best-loved coastal destination. It is one of a number of smaller, less crowded holiday resorts that have been listed as the nation’s favourites for a staycation visit.

The survey of members by Which? is bad news for louder and more traditional destinations, particularly Skegness, Weston-super-Mare, Ilfracombe and Margate.

With more people expected to book a holiday at home than ever before as a result of the Covid-19 pandemic, the consumer champion sought out views on Britain’s coastal towns and villages.

The survey of more than 4,000 people ranked nearly 100 towns and villages and put Bamburgh at the top with a customer score of 85 per cent, with five stars for its beaches, tourist attractions and scenery.

And it received an additional five stars for value for money, with prices for accommodation being half those of some popular spots in Cornwall.

Visitors were particularly fond of the castle, and despite the small size of Bamburgh village, the vastness of its beach meant it received four stars for peace and quiet, allowing visitors to easily distance themselves and avoid busy crowds.

The survey of members by Which? is bad news for louder and more traditional destinations, particularly Skegness, Weston-super-Mare, Ilfracombe and Margate

Other responses suggest word has spread about Bamburgh’s appeal, with some encouraging visitors to reserve tables in the restaurants in advance as places are often booked up, and arrive at the castle early to secure a parking space.

Visitors rated nearly 60 British seaside destinations at 70 per cent or above, while 30 were awarded four or five stars for peace and quiet.

Tynemouth, in Tyne and Wear, took joint second place alongside Dartmouth in Devon. Both received a visitor score of 84 per cent, and five stars for their seafronts, while Tynemouth was given five stars for its beach and seafront, and four stars for scenery.

Visitors to Tynemouth praised the selection and quality of restaurants and food options on offer, as well as the market at the Metro station at weekends.

While those who had been to Dartmouth recommended taking a boat trip along the River Dart or the steam train from Paignton to get there.

St Andrews was named as Scotland’s best beach town. Busier than some of the other destinations at the top of the table, the ‘home of golf’ earned its high ranking thanks to its five-star-rated tourist attractions.

It won a four-star rating for its shopping options, beaches and value for money. Those looking to beat the crowds were advised by respondents to visit outside of term time when fewer students of its famous university are around.

Aberaeron was named the best seaside town in Wales, with a customer score of 82 percent. The quiet harbour town was given five stars for its scenery, with visitors commenting fondly on the painted houses in pastel colours.

Languishing at the bottom of the table for the second year in a row was Skegness, seen as being stuck in the past. It scored a lowly one star for its tourist attractions and scenery, and its beach was given three.

However, visitors noted an improvement as the result of investment and refurbishment in the town centre and higher footfall, with more people holidaying in the UK.

Respondents recognised the family-friendly appeal of Skegness and its amusements. One commenter described it as ‘unpretentious and a very pleasant place to visit’, and encouraged visitors to ‘enjoy the old fashioned 1950s atmosphere of a traditional English seaside town’.

Other destinations at the bottom end of the table included Weston-super-Mare, Ilfracombe and Margate.

The editor of Which? Travel, Rory Boland, said: ‘Many of us discovered the joy of a British summer holiday last year and the trend looks set to continue well into this summer. The results of our survey show that bigger is rarely better, with smaller and less crowded resorts taking the top spots over better-known destinations.

‘Given the crowds and prices at some of Britain’s most popular seaside destinations, the best news from the survey is just how many highly-rated destinations we have to choose from.

‘Whether you want a village with a beach or a big town with all the fish and chips you can eat, there is a fantastic spot by the sea for you.’