Ahmad Ali Butt and Fatima Khan’s love story is something for the books! 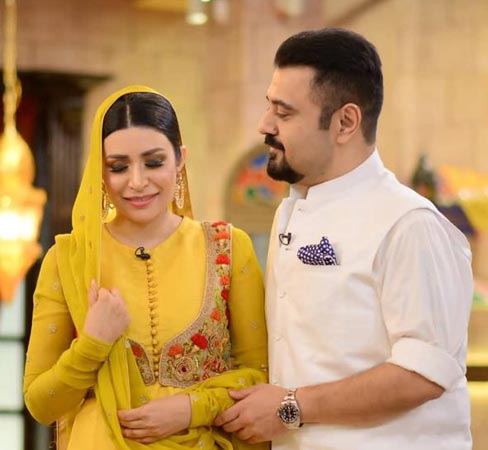 Ahmad Ali Butt has been married to wife Fatima Khan since 2013, and the pair’s love story is something for the books!

The couple sat down with Nida Yasir on her show Good Morning Pakistan and opened up about how they went from being friends to lovers, with Fatima sharing how Ahmad had to wait for eight long years before she said yes to his proposal!

The couple first met back when they were in college and Fatima needed some sponsors for an event she was a part of. As luck would have it, she had to approach Ahmad for help since his family was pretty well-connected, and he had quite the reputation!

“They were popular as the ‘Butt Brothers’ among girls and had a pretty scary reputation,” recalled Fatima. “I used to be really scared of approaching him.”

‘They were popular as the Butt Brothers among girls and had a pretty scary reputation,’ recalled Fatima. ‘I used to be really scared of approaching him’

Eventually, as things progressed, Ahmad met Fatima’s father, and just when their mothers were supposed to meet, he ended up with cold feet. “He called me at 4 am the night before they were due to meet, and couldn’t really say what was wrong,” she shared. After much convincing, he confessed that he was “still in love with his ex-girlfriend! Fatima then changed numbers and for the UK the next day.

“Six months passed, and then somehow his mother, who was visiting London, called me up. I had a really good relationship with her so I went to meet her,” said Fatima.

A surprise awaited her when she went to meet her future mother-in-law. “She asked me to go in the room and get fresh, so I did, and he was sitting inside with tears streaming down his face!”

That wasn’t it for them to turn into a couple! It took a further eight for Fatima to finally cave in and say yes to marrying Ahmad.

“For eight years he would constantly message and call me every single day and one day, I woke up and realised that I can’t live without this person anymore and that was it!”