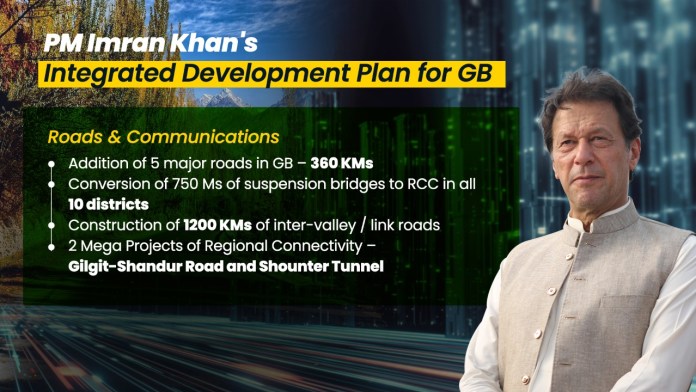 “This Rs 370 billion package for five years is just a beginning.  We will be assisting you more as you require. As per my prediction, if you properly take care of tourism, you will no more need money from center rather we will seek funds from you. You cannot imagine as how blessed you are,” the prime minister said addressing a ceremony here during his day long visit.

The prime minister, who earlier unveiled plaques to inaugurate and break ground for multiple projects under the development package, said he had been awaiting such a package for GB.

He also appreciated Asad Umar for designing a mix of projects under PSDP and Public Private Partnership keeping in view the affordability of the federal government.

He said despite financial constraints owing to huge debt burden, the federal government had scraped Rs 370 billion package for GB with whom he had an association since his school age.

He said having visited Austria and Switzerland, he had found GB as the most beautiful region in the world, also admitted by his foreigner friends.

Even those who went through his pictorial book “Indus Journey” the people in Pakistan and abroad were stunned to see the beauty of Pakistan.

The prime minister said the previous rulers showed blithe lack of concern towards GB’s development as they used to visit London for vacations where they had their children as well as properties.

However, he said the PTI government decided to exploit the potential of the region particularly in tourism.

Drawing a comparison between Pakistan and Switzerland, the prime minister said the latter earned around $60 billion to $80 billion just from tourism which was far higher than former’s total exports of $25 billion.

He said the development of GB would not only change the living standard of the locals but would also bring in foreign exchange for the country.

Appreciating the GB Chief Minister Khalid Khurshid for his passion to serve his people, Imran Khan expressed satisfaction over his decision of nominating him for the slot.

He told the gathering that the GB was an attractive destination for both summer and winter tourism. In summer, it will attract the locals while for winter, it was a suitable site for skiing which was also a major revenue source for Switzerland too.

However, the prime minister repeatedly instructed the GB government not to compromise the town planning and environmental protection while executing the projects as it could prove counterproductive.

He said as the area remained disconnected, it helped the locals build a good community system which would also help the enforcement of bylaws for tourism as well as town planning.

Calling it another step towards provincial status, Imran Khan said the incumbent government had decided to let the GB government make its own decisions doing away with a decades old practice of overseeing the affairs from Islamabad.

He said an impression was created that the GB people were incapable to run their affairs which provided an excuse of controlling the affairs from the federal capital.

The prime minister viewed that a society lacking rule of law could never prosper. He said the people involved in petty financial crimes only inflicted loss to individuals but the big plunders caused damage to whole country through money laundering which consequently caused inflation and poverty.

He said otherwise inactive since last two decades, the National Accountability Bureau (NAB) had started going after big criminals during the PTI government.

He said the country was faced with corrupt mafia but was confident to say that he had been “trained to defeat them.”

The construction of five major road with total stretch of 360km, conversion of suspension bridges to RCC in 10 districts, 1200km inter-valley roads and two mega projects of regional connectivity including Gilgit Shandur Road and Shounter Tunnel would be built under the package which also features the installation of Concordia BTS by SCO, in memory of legendary mountaineer Ali Sadpara, in most harsh terrain to provide 4G connectivity to those going for K2 expedition.

The prime minister also performed ground breaking for second phase of Pak-China optic fiber project along all three CPEC routes. The first phase involving the laying of optic fiber across 990 km stretch from Khunjrab to Rawalpindi has already been completed. The launch of fiber to home project for 39 cities is also part of the package.

Imran Khan inaugurated the first IT park and technology incubation center set up by SCO and KIU. It will give an opportunity to fresh IT graduates and small business owners to showcase their talent and get initial support to further expand or start a new business.

Under the package, the jurisdiction of USF would be extended to GB and the auction for 4G licenses would complete till June this year.

Planning Minister Asad Umar told the gathering that after Karachi, Balochistan and 14 Sindh districts, it was the fourth development package by the PTI government to ensure uplift of ignored areas.

He said out of Rs 370 billion, Rs 140 billion would be spent on nine power projects to generate 250MW, Rs 33 billion on roads, Rs 6 billion for tourism, Rs 17 billion for education and health sector, Rs 8.5 billion for water supply and sanitation schemes and Rs 2 billion for environmental protection.

He said April 30 would be remembered in GB’s history when a government came up with an unprecedented development package as a big leap towards interim provincial status.

He said the government had also decided to give GB representation in all constitutional forums.

Kashmir Affairs Minister Ali Amin Gandapur said keeping in view the deprivation, Imran Khan increased budget for GB in the past, despite the fact that PML-N was in power there

He said the development projects faced delay there because the then rulers were not interested in public welfare rather their own interests.

Chief Minister of Gilgit Baltistan Khalid Khurshid said since 1947, no such package was ever given to GB.

He said despite a potential of 50,000MW hydel power, the GB still faced up to 20 hours load shedding.

He said poor connectivity was major impediment in boost of tourism and said the hotels were suddenly filled to their capacity after the government started Skardu-Lahore flights. He said the people were awaiting the expansion of Skardu Airport to cater international flights.

Khalid Khurshid said the auction of 4G licenses would fulfill the longstanding demand of the GB people. He assured that while executing the projects under package, the GB government would not allow unplanned construction rather ensure proper town planning and environmental conservation.