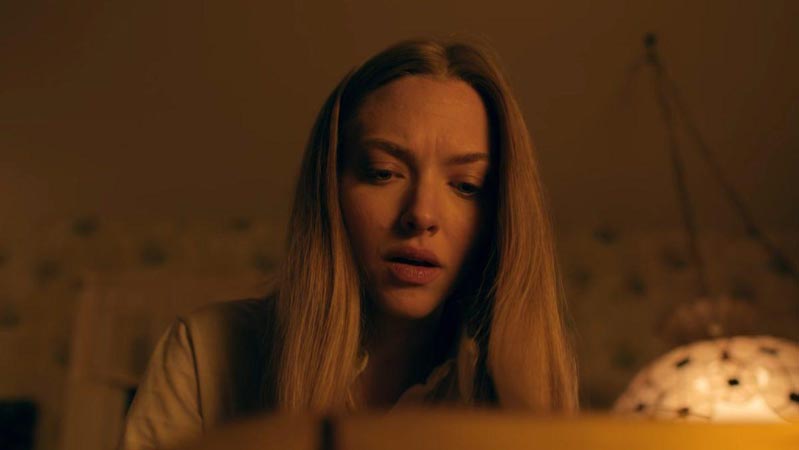 It was 18 years ago – how time flies in the indie world – that the married directing team of Robert Pulcini and Shari Springer Berman brought us “American Splendor,” an achingly humane, scabrously funny, miraculously playful and inventive lower-depths comedy based on the life and work of the lumpen verité comic-book diarist Harvey Pekar, played by Paul Giamatti in a performance of irascible brilliance. The movie was an audacious triumph and going forward one wanted and expected, more great things from Pulcini and Berman. In the years since, however, nothing they’ve done has come within miles of living up to the promise of that landmark film. The odd thing is that their earnest empathy and craft is always on display; they have an instinct for pace, for camera angles, for how to seek out three dimensions in places where too many filmmakers settle for two. Yet lightning has never struck again for them. I’m always hoping it will and their latest film, “Things Heard & Seen,” offers their usual tease of look-we’re-honest-commercial-filmmakers-trying-to-aim-high.

It’s a ghost story, set in 1980, starring Amanda Seyfried and James Norton as Catherine and George Claire, a couple with a young daughter who move from the Upper West Side of Manhattan, where George has just gotten his PhD in art history from Columbia, to the Hudson Valley, where he lands a job as a professor at Saginaw, a small private college distinguished mostly by its bucolic setting.

To make the move, Catherine is forced to put her own career as an art restorer on hold, which she does with a quiet regret that becomes more tangible when they tour the old farmhouse George has his heart set on buying. It’s a fixer-upper with great bones and Catherine is just the one to renovate it. But we can already see that she’s not getting off on his boutique dream of being an academic star in the upstate countryside. For George, it’s always all about him.

The most interesting aspect of “Things Heard & Seen” are its scenes from a marriage that’s falling apart in slow motion. Seyfried knows how to bury Catherine’s resentment so that it simmers just under the surface of encounters and Norton, who looks like a dreamboat version of Michael Murphy, knows how to play a husband who’s a narcissist and maybe worse. He does it by trying to reel in the gaslighting side of himself, which only exposes it more. 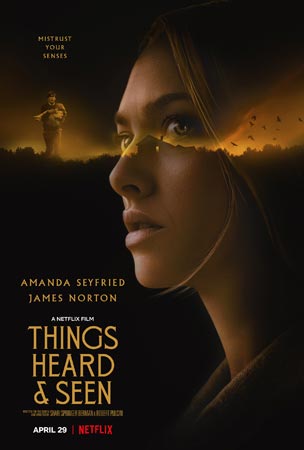 Then there’s the ghost stuff. In the bedroom of four-year-old Franny, a rocking chair moves all by itself. A creepy nightlight throbs and pulsates with a David Lynchian glitchy electric buzz. Elsewhere, an electric toothbrush turns on by itself, and a mysterious light-pulse wafts through the kitchen. There’s no ambiguity about whether we’re seeing something supernatural. But since these motifs, while cleverly executed, are standard enough to be found in a schlock ghost thriller, we assume that the filmmakers have something more elaborate up their sleeves. For several decades now, it’s been the exception rather than the rule to see a ghost story that’s an actual drama – like “What Lies Beneath,” “The Sixth Sense,” or “Hereditary.” For a while, one watches “Things Heard & Seen” thinking there’s a ghost of a chance it might join their company.

It does not. Seyfried and Norton do a vivid job of enacting the testy chemistry of a toxifying marriage, and there are fun performances by the two actors playing George’s academic colleagues. F Murray Abraham, who is 81 but so crisp and spry he seems 15 years younger, plays the art-history department chairman, a courtly chap with a sinister fixation on Emanuel Swedenborg, the 18th-century Swedish theologian who spun his vision of the afterlife out of a mystic communion he claimed to have with angels and demons. As soon as Abraham says the word “séance,” we know we’re he’s coming from. And Rhea Seehorn, from “Better Call Saul,” gives a delectable sharp-tongued performance as Justine, an artful weaver of tapestries who’s got George’s number from the beginning, but gets it more with every encounter. The filmmakers don’t do a lot with the 1980 setting, but the reason it’s there is to fill in the portrait of a beleaguered wife at a time when male caddishness was less questioned. As the movie goes on, we have other questions, such as: Why do the ghosts, after they’re introduced, end up doing next to nothing? Why does the horse trainer who George winds up sleeping with pop up in so many convenient locales that she could be an “Airplane!” character named Connie Coincidence? And why, after Catherine does all that renovating, hiring two local brothers at dirt-cheap prices, does she never get around to peeling and painting the house’s scruffy exterior? One more question: Why isn’t the film remotely scary? Those brothers, hunky Eddy and dutiful Cole, used to live in the house, but the backstory of what happened to them there has been hidden from Catherine. When she finds out, she’s shocked – and you may be shocked, too, at how “Amityville” banal it is. What lies beneath “Things Heard & Seen” are clichés.