* Imran Khan says he never directed ex-FIA chief to file cases against Justice Isa, Maryam Nawaz or anyone else from PML-N or PPP
* Wonders why would he ask Memon when he was not even authorised to file a reference against an SC judge 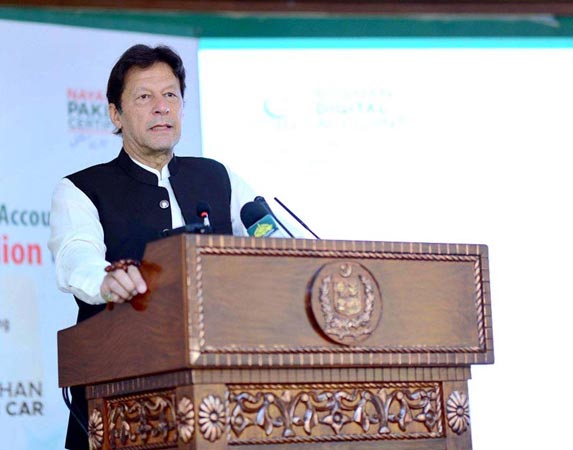 Prime Minister Imran Khan on Thursday maintained that all the claims made by FIA former director general Bashir Memon against him were ‘baseless’.

“I had only directed Memon to investigate the iqama (work permit) case of PML-N’s Khawaja Asif,” the prime minister said as he broke his silence regarding the allegations levelled against him by Memon a couple of days back. “Whatever Memon has alleged is a lie. I did not ask him to file cases against Justice Qazi Faez Issa, Maryam Nawaz or anyone else,” he told senior journalists in Islamabad. “It was not Memon’s job to file references, why would I give such an order to him?” he asked. “Bashir Memon was not even authorised to file references [against a Supreme Court judge], so why would I ask him to do so in the first place?” he wondered.

“The decision to investigate the case of Khawaja Asif was taken during a meeting of the federal cabinet,” the prime minister said, adding that he had directed Memon to investigate whether the country’s former foreign minister was holding a foreign resident permit and withdrawing a salary from foreign sources. Responding to a question, the prime minister said that he had also not directed Memon to file any cases against opposition leader Maryam Nawaz or anyone else from the PML-N or the PPP. “I have never asked [the FIA] to file a terrorism case against Maryam Nawaz regarding the photograph of the First Lady,” he maintained. “Bashir Memon used to only brief me about the investigation the FIA’s joint investigation team was carrying out against the Omni Group,” he added.

Talking about Jahangir Tareen issue, Imran Khan said that Dr Rizwan has not been removed from his post and Abu Bakr Khudabakhsh would work with him. He reiterated that there will be justice in the case of Jahangir Tareen.

A day earlier, Adviser to Prime Minister on Interior and Accountability Mirza Shahzad Akbar had also served a Rs 500 million legal notice on Bashir Memon for raising false, politically motivated and absurd imputations against him, prime minister, principal secretary to prime minister and law minister, in a television show. Shehzad Akbar had also refuted claims of any meeting about Justice Isa, calling the allegations ‘rubbish’. “He was never called for any meeting with PM or myself on Justice Qazi Faez Isa issue, and there was no meeting with the law minister and him as he claims. Similarly, he was never told to start any case against any specific individual,” he had said. “Only case referred to FIA was of sedition by the federal cabinet,” he added.

It should be recalled that a few days ago, Memon, while speaking on a TV programme, had alleged that he was asked by the prime minister himself to file cases against Supreme Court’s Justice Qazi Faez Isa and opposition leaders during his tenure as the FIA’s director-general. Memon had claimed that Federal Minister for Law and Justice Farogh Naseem and the Special Assistant to the Prime Minister on Accountability and Interior Shahzad Akbar had also wanted him to proceed against Justice Isa on money laundering charges.

The former FIA chief had said that he had refused to do so as “the FIA had no grounds to do so, especially since the matter pertained to a Supreme Court judge.” Memon had said he once had a meeting with the prime minister during which the premier lauded his services by saying that he is a “very good officer” and told him to pursue cases against corrupt people. The former DG FIA said he did not know at the time that he would later be asked to file a case against Justice Isa.

“It was in Akbar’s office that I got to know that the case PM Imran was referring to was to be filed against Justice Qazi Faez Isa,” Memon said. “I told Akbar categorically that it was not possible for me to do that.” The former FIA chief said he was then taken to the law minister’s office, saying that minister Naseem was also convinced that a case against Justice Isa could be filed.