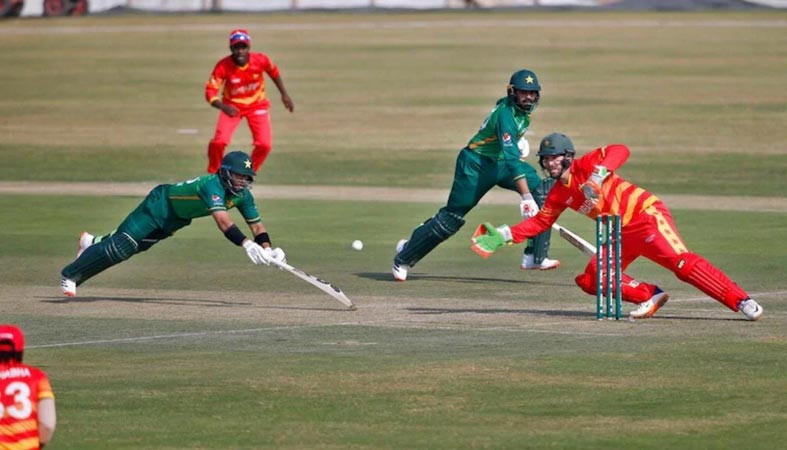 HARARE: Zimbabwe have named a young squad for the two-match Test series against Pakistan with the inclusion of five uncapped players. Luke Jongwe, Richard Ngarava, Roy Kaia, Milton Shumba, and Tanaka Chivanga have all earned their maiden Test call-ups. Brendan Taylor, who missed Zimbabwe’s last Test series against Afghanistan in the UAE because of health issues but made a comeback for the second and third T20Is against Pakistan, has made the cut. Craig Ervine continues to miss out because of a calf injury. Tendai Chisoro, who played his only Test match in 2017, has also been recalled. The players from Zimbabwe’s Test squad against Afghanistan to miss out were Sikandar Raza, who is recovering from a bone marrow infection, Ryan Burl, Wesley Madhevere, Richmond Mutumbami, and Brandon Mavuta. Of their replacements, right-arm medium pacer Jongwe was Zimbabwe’s most successful bowler in the T20Is against Pakistan with nine wickets, while left-arm quick Ngarava took two wickets at an economy rate of 8.36. Kaia, a 29-year-old middle-order batter, was part of the XI on his ODI debut against Pakistan in Lahore in May 2015, but didn’t get a chance to bat or bowl as the game was washed out. Shumba, a 20-year-old left-arm spinner, has played two T20Is, while 27-year-old fast bowler Chivanga has never played internationally. Joylord Gumbie, a wicketkeeper-batter, and Takudzwanashe Kaitano, an offspin-bowling allrounder, have been placed on standby.

The first Test is starting on Thursday (today). Pakistan would look to make amends in the batting department as the margin of victory in the T20Is were threatening. But with momentum in their favor after a successful white-ball campaign, Pakistan will eye for improved all-round performance. The last encounter between the two sides in the Test format was way back in 2013 on the same ground. Coming from behind in the two-Test series, Zimbabwe stayed patient to snatch a victory on the final day of the second Test match to square the series and share the trophy. Zimbabwe and Pakistan fought each other neck-to-neck as Misbah-ul-Haq stood in Zimbabwe’s way to the victory but as wickets fell from the other end, Misbah’s unbeaten resilience came to a natural end. Tendai Chatara starred with the ball as he took a five-for which led Zimbabwe to a 24-run win.

Pakistan has won all four white-ball series and the momentum will be on their side going into the Test series. Pakistan had slumped to an embarrassing low during their ongoing Zimbabwe tour when they were bundled out for 99 runs chasing 118 on April 23. The one-off defeat helped Zimbabwe level the series 1-1. But the visitors won the final T20I by a big margin to clinch the series 2-1. In the batting department, Pakistan will be hoping Fawad Alam and Mohammad Rizwan score big. They scored centuries against South Africa at home. Rizwan, who is having an exceptional 2021 in white-ball cricket, will be eyeing another ‘player-of-the-series’ award after winning it in the two Test series against South Africa.

Babar, who recently became the top batsman in the ICC ODI rankings and got promoted to No. 2 in the ICC T20I rankings, is currently on sixth spot in Test rankings. The right-handed batsman will be looking to contribute big with the bat in the Test series to get into the top-five. Only 71 points separates the fourth, fifth and sixth positions. Pakistan will rely on their most experienced batsman Azhar Ali in the two-match Test series to give them stability in the batting department. Azhar, who has scored 6,417 runs in 85 matches, will be eager to score big against the hosts, as Ireland, South Africa and Zimbabwe are the only Test sides against whom he has not scored a century in a career spanning more than a decade. In the bowling department, Hasan Ali and Shaheen Shah Afridi will be itching to take wickets. Since 1993-1994, the two countries have played eight Test series, and the hosts have won only one — in 1998, where they won the three-match Test series 1-0. In 18 Tests played so far, Pakistan have won 10 and Zimbabwe three. Four matches were drawn, while one was abandoned.

Zimbabwe skipper Sean Williams said: “We are pretty excited for the tests. The wickets look extremely good for that and a new bunch of players will join the team and start their training.” Hasan Ali, Pakistan all-rounder, said: “We are looking forward to it. The last test series we played went well for both the team and myself. In the game, I took 10 wickets and we will definitely play better cricket.”