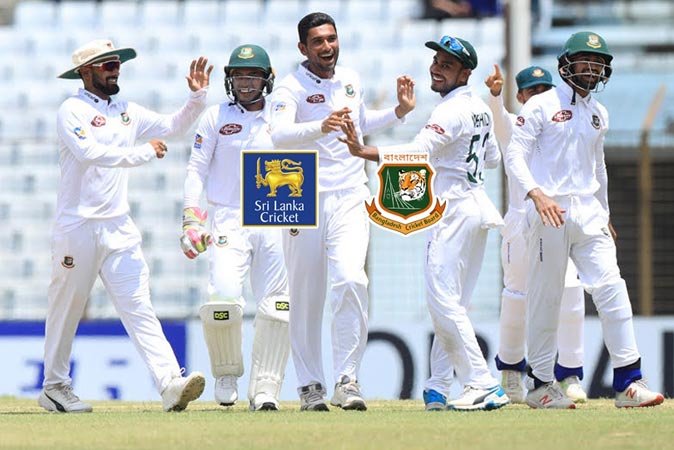 KANDY: After 28 consecutive result Tests in Sri Lanka ––– a glorious run stretching back to 2014 and a world record (by a distance) for any Test-hosting country ––– the first Test between Bangladesh and Sri Lanka was essentially trash from start to finish. The surface was slow from the outset, there was little movement to be had off the pitch or in the air, and as the deck had live grass on it, it didn’t break apart for the spinners either. We can only really hope that the surface for the second Test will be different. The strip that had been marked out for the second Test still had a lot of grass on it when the first Test concluded, and was still being watered. Perhaps they will shave it down and dry it out before Thursday morning, which should, in theory, make it better for the spin bowlers. If the first Test taught us anything, it is that even in Pallekele – the coolest of Sri Lanka’s Test venues – it is difficult to prepare a seam-friendly pitch during these scorching months of the year.

Although bowlers will differ, neither team will be especially upset at how the first Test went. Tamim Iqbal looked outstanding in both innings, while Mominul Haque made his first century on foreign soil, and Najmul Hossain Shanto scored his first ever hundred. With two others also making half-centuries, they will feel like the batting order is in form. Sri Lanka also have a top order that seems, for now, to be functioning, but will worry about taking 20 wickets. They have never hosted Bangladesh for a Test series and failed to win at least one Test. What if the pitch is too similar to the one rolled out for the first Test? They have lost Lahiru Kumara, who perhaps seemed the most likely among the bowlers to bring a dead pitch to life. It is likely they will have to rely on wristspinners Wanindu Hasaranga and Lakshan Sandakan. The issue is, neither have ever really won a Test for Sri Lanka, off their own bowling.

Dhananjaya de Silva promised plenty in his debut series, against Australia in 2016. He has been through some leaner years since then, when he was up-and-down the order, as well as in-and-out of the XI. Over the past couple of years, though, his batting appears to have become more consistent, and he has made a lower-middle order spot his own. Now, though, he is expected not just to produce the kinds of runs he did in the first match (he hit 166) but also contribute with his offspin. If he can get that batting average above 40, and begin to be a little more threatening with the ball, he may become a truly invaluable player – his fielding standards having been consistently high.

Although he didn’t hit a hundred Tamim Iqbal was perhaps Bangladesh’s most impressive batter in Pallekele. His first-innings 90 off 101 taking the wind out of the Sri Lanka bowlers’ sails before his 74 not out off 98 in the second dig crushed any mild hope the hosts might have had of forcing a victory. Through the course of both innings, Tamim was fearless, and had the look of a batter who could be poised to play a series- defining innings.

The pitch, with any luck, will give the spin bowlers a little more assistance than the surface for the first Test did. If there’s cloud cover, there can sometimes be movement in the air for seamers at this venue as well. Sri Lanka are likely to replace the injured Kumara with a spinner. Question is, do they go for left-arm wristspinner Sandakan or offspin-bowling allrounder Ramesh Mendis? They may think about bringing Asitha Fernando into the XI for his skiddy seam on what may be a pitch without a lot of bounce, but will likely stick to Suranga Lakmal and Vishwa Fernando: the former for his experience, the latter because he was the most impressive of the seamers in the first Test.

Bangladesh are unlikely to rock the boat, and their coach Russell Domingo has said Saif Hassan will keep his place at the top of the order despite his low scores in the first Test. Depending on how they see the pitch, they will also have to take a call on their bowling attack though both their best spinners played in the last game.