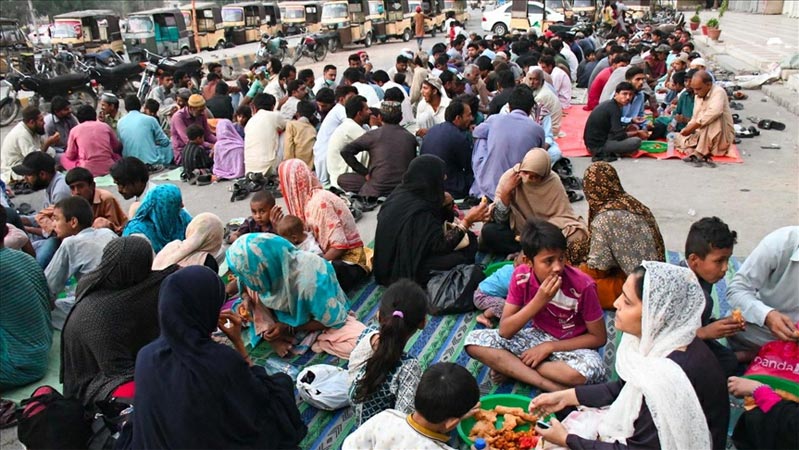 Sitting on a plastic mat on a stony footpath opposite the mausoleum of the country’s founder, Muhammad Ali Jinnah, Khair-un-Nisa, together with dozens of other women, was awaiting for Maghrib adhan, Islamic sunset prayers call, to break her fast as honking traffic passed by.

Volunteers were placing traditional delicacies and drinks on dozens of mats occupied by hundreds of people as the sun began to fade. Nearby, a volunteer was preparing a local drink for the fasting people.

Motorists hurriedly pulled over, adjusting themselves around the tables or occupying the plastic mats to join them. They broke their fast as the Maghrib prayers call resounded from a nearby mosque.

Another group of volunteers distributed food packets, water bottles, and juice to people who were fasting and sitting in their vehicles and on public transport.

Donned in a traditional burqa (an encompassing veil from head to toe), Nisa, a daily wager in her early 40s, has to break her fast in the makeshift dine because she couldn’t get home due to a choking traffic jam, which happens every day before sunset during Ramadan. This facility is one of the hundreds in Karachi that provide an Iftar meal for the entire month.

However, the decades-long tradition that remained was put on hold last year due to the coronavirus lockdown, compelling charities and philanthropists to look for alternatives to provide food to the poor during the holy month.

Although the situation this year is no different as a devastating third wave of the virus continues to wreak havoc on the South Asian country, roadside Iftars have been allowed by the government.

“After a gap of one year, the (roadside) Iftar has been planned,” Arif Lakhani, an official of Saylani welfare trust, which provides Iftar meal to fasting people throughout the month at 75 points in the metropolis, told Anadolu Agency while overseeing the arrangements.

“This was the first time in ten years that we did not arrange the street Iftar for the people,” Lakhani, whose charity has been providing meals since 2011, said, referring to the city’s complete lockdown last year.

Zaid Junaid, who recently graduated from a local university, has also resumed his activities of organizing roadside Iftar at a section of the University Road after a year’s hiatus.

Until 2019, he had been organizing Iftar for over 200 people every day with a group of 15-20 friends and the help of some local philanthropists.

“Instead of arranging street Iftar last Ramadan, we delivered food packets to people in a low-income neighborhood at their doorsteps,” he told Anadolu Agency as he handed a water bottle to a young Afghan.

Delivering food at home, he added, was a tougher job.

“We didn’t ask for permission, and the government didn’t stop us,” Junaid, attired in a jean and a polo shirt, said with a light smile.

A few individuals had started arranging roadside Iftar during Ramadan in Karachi – home to over 15 million people and the country’s commercial capital – two decades ago, and it has now become a tradition.

This tradition was quickly adopted by a number of other cities, including the capital Islamabad, where roadside Iftar stalls provide food to tens of thousands of people during Ramadan.

Lakhani observed that things have changed after the pandemic in terms of safety precautions. Only a few volunteers and the guests were wearing face masks.

“It’s hard to convince them to follow the safety precautions. Most of them are still unconcerned about coronavirus,” an apparently frustrated Lakhani said.

Ignoring safety protocols, he noted, is a threat to not only the violators but also those who are following the precautions.

A visit to several Iftar points in the city revealed that safety precautions are the last thing for the majority to follow.

The surging pandemic has also reduced the number of guests at the roadside Iftars.

Supporting Lakhani’s views, Junaid said some prefer to get food boxes instead of the huddle on mats. But, he added, a majority still prefer to sit and eat shoulder to shoulder.

This year, the number of his visitors has decreased by almost half, he said.

Although there are no official data, it is believed that tens of thousands of factory workers, laborers, and domestic employees have returned to their hometowns after losing their jobs due to a simmering economic crunch caused by the pandemic.

Coronavirus fear, according to Junaid, could be another factor that has slashed the number of visitors.

“I have noticed that many motorists do not stop to even collect the food boxes at Iftar time [this Ramadan],” he added.

Endorsing the argument, Mohammad Faisal, who works at a local publishing house, said: “I used to drop by and break the fast at any of the roadsides points or a restaurant in case of traffic congestion.”

“But since the beginning of the pandemic, I have stopped this practice. I simply keep a couple of dates and a water bottle in my bag to break the fast in case I am unable to reach home on time due to traffic jams,” he told Anadolu Agency.