Ruling elite enjoying all powers and impunity in Pakistan: PM 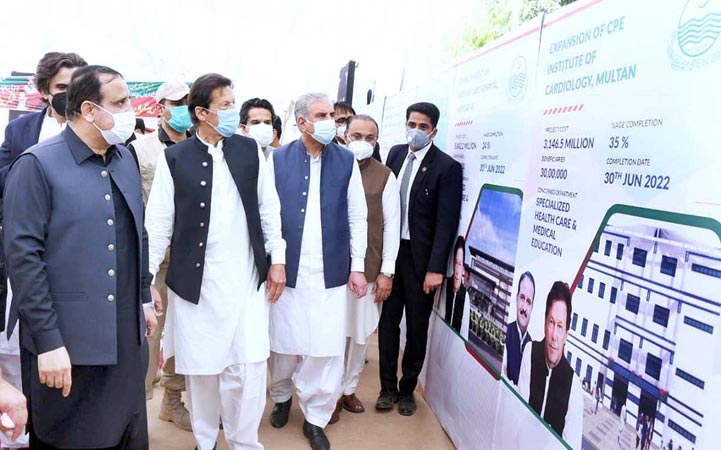 Prime Minister Imran Khan on Monday criticized the self-centered policies of former ‘ruler of Takht-e-Lahore’ Shehbaz Sharif and said that he entered into politics after witnessing that a small segment of ruling elite was enjoying all powers and impunity.

“No law of the land was applicable on them as they frequently indulged in corruption, deals and national reconciliation ordinance. They lived in palatial houses abroad which they purchased through money laundering,” he said while addressing the groundbreaking ceremony of South Punjab Secretariat. He said the ruling elite class had been living in posh areas of London where even a British minister cannot afford to purchase property.

In a veiled reference to former ruling elite, the prime minister said they are doing politics in Pakistan and making investments abroad. He said the royal family of Lahore spent only on the development of those areas of Lahore where they lived whereas his government has focused on the development of merged tribal areas, interior Sindh and other backward areas of the country.

About other achievements, the prime minister said even the richest countries cannot afford to roll out health insurance to all of their populations. He said his government has launched Kissan Card in Punjab province and it is for the first time that anyone has thought of small farmers.

He said the UNDP report indicates that the Khyber Pakhtunkhwa government had spent hugely on the human development, which helped in poverty reduction and bridging the gap between the rich and the poor. The previous rulers were restricted only to publication of media advertisements for their self-projection, he added.

Speaking about Islamophobia in the West, the prime minister said he will prove that his strategy would be successful in countering the issue. “With the cooperation of heads of Islamic countries and through a joint approach, we will go to the European Union and the United Nations asking them that they cannot hurt the sentiments of 1.25 billion Muslims in the garb of freedom of expression,” he said. “It is the only way through which we will effectively counter the future incidents in Europe,” he said. While on the other hand, the TLP tried to invade Islamabad through setting riots, he lamented.

Imran Khan said the establishment of South Punjab Secretariat was a step towards new beginning as now, the allocated development funds would be spent on the prosperity of the people of this neglected region. He said according to statistics, the region consisted of 33 per cent population of the Punjab province, but in the past only 17 per cent of the budget allocation was made to it. Due to re-allocation of uplift funds, about Rs260 billion losses were incurred in these areas due to poor policies of the previous provincial governments, he added.

The prime minister said they had also decided that South Punjab would get its due job quota according to its size and population. All the issues of the region would be resolved in the secretariat, he added. “South Punjab Secretariat is a historical event, a new beginning for South Punjab province and a transition.”