* The photo not just made considerable waves among Pellumbi's followers, but also with Hira Mani herself, who immediately proposed a rishta for Pellumbi! 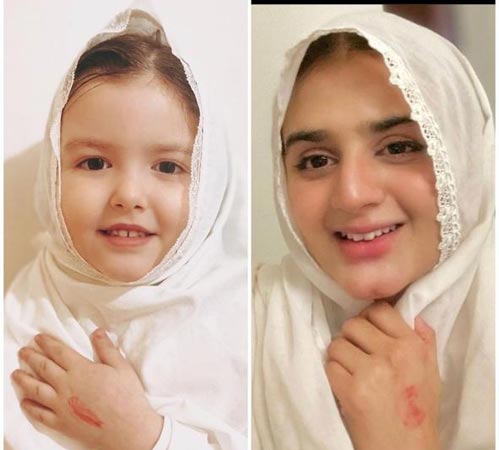 Hira Mani, known for her acting prowess, is equally well-known for her quirky personality that was on full display once again when she noticed a four-year-old Albanian child blogger who recreated one of her looks.

Marge Pellumbi, known for recreating a number of celebrities’ looks, from Sajal Aly to Yumna Zaidi, also posed as Hira in one of her more recent posts. The adorable four-year-old wrapped her head with a white dupatta just like Hira.

The photo not just made considerable waves among Pellumbi’s followers, but also with Hira Mani herself, who immediately proposed a rishta for Pellumbi! Yes, she asked for her hand in marriage for her son Ibrahim.

If that wasn’t enough, Hira Mani also shared the post on her Instagram story, again asking Pellumbi to be her daughter-in-law.

Naturally, Hira’s enthusiasm didn’t quite strike with netizens who bashed her for joking about marriage of such young kids – her son Ibrahim was born in 2014. What do you think of Hira’s eccentric request?