Fittings, facials and her parents’ ‘honest advice’ — Giuliana reveals how she preps

* First things first, Giuliana makes sure to prep her hair and skin in the days leading up to a big event 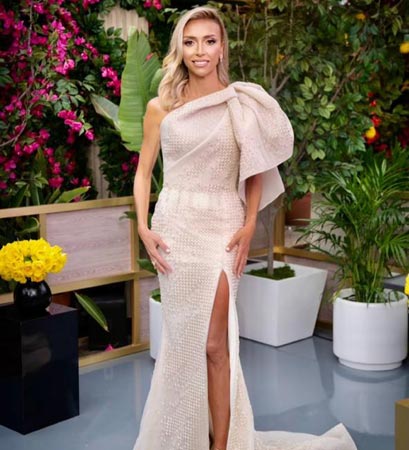 Reporter and television personality Giuliana Rancic geared up to serve sophistication at the 2021 Oscars.

Ahead of E!’s red carpet coverage of the 2021 Oscars on Sunday, April 25, G is sharing all the BTS details on her stunning look exclusively with E! News, including how she preps her skin beforehand, chooses an award-worthy dress and handles any wardrobe malfunctions.

First things first, Giuliana Rancic makes sure to prep her hair and skin in the days leading up to a big event. That starts in Chicago, where she lives with her husband, Bill Rancic, and their 8-year-old son, Edward Duke Rancic.

She gets a fresh haircut and colour by her long time hairstylists at RMCM Salon in Chicago. A week before the show, she treats herself to a hydrating facial with Ana Ibarra at The Med Spa at Northwestern in Chicago.

“I have been going to her for years,” said G, “and she really helps my skin stay healthy, hydrated and nourished.”

On Saturday, April 24, a day before the Oscars, the host got a deep sculpting facial massage from Candace Marino, aka The LA Facialist.

“Candace helps with naturally energizing the face through a technique she created,” G said. “The process was invigorating yet relaxing at the same time and when it was over, my skin had a beautiful glow and was definitely red carpet ready.”

She gets a fresh haircut and colour by her long time hairstylists at RMCM Salon in Chicago. A week before the show, she treats herself to a hydrating facial with Ana Ibarra at The Med Spa at Northwestern in Chicago

As for the gown, Giuliana explains that picking out a red carpet dress usually happens a few days before the big show. For the 2021 Oscars, her very first fitting was Thursday, April 22, which was only three days ahead of time.

Her stylist Ashley Guereque typically meets G at the Janet Mandel Showroom in Los Angeles for their first fitting. “[It’s] where we have found most of my red carpet looks from the past few years,” Giuliana shares.

Ashley usually pulls about a couple dozen dresses as options. As G describes, “The very first thing we do is go through the racks together and choose a handful of favourites to try on first. I would say the winner is usually found in the first few I try on.”

There are two people she can always count on to tell her the truth about how a potential red carpet outfit really looks: her parents. “I send them photos of my gown options beforehand to see what their thoughts are,” Giuliana says.

It turns out they really have an eye for fashion. The Giuliana & Bill alum reveals, “My father, Eduardo DePandi, is a master tailor from Naples, Italy and makes beautiful suits for his stylish customers so he has impeccable taste, as does my mother, Anna. I know I will always get honest advice from the two of them.”

Once the dress is selected, her tailor has the dress ready to go by the next day. The veteran reporter then tries the dress on again, along with various shoe and jewellery options, meaning the complete and final look is determined 48 hours ahead of time.

The night before a red carpet, she gives her skin some “extra hydration” by using her Fountain of Truth Honey Glow Mask for 20 minutes, “so I wake up with healthy, glowing skin,” she explains.

But on the actual day of the Oscars, Giuliana’s morning begins with the most important meal of the day. For her, that’s an oat milk latte, oatmeal and an egg scramble and toast. “I also have a smoothie filled with lots of healthy ingredients,” G adds.

She starts getting ready three hours before her red carpet call time. Before any makeup goes on, the E! host uses her Fountain of Truth Insta-Face Lift Elixir to get dewy skin. “It’s great to help my skin look tighter and smoother both in person and on camera,” she says.

Giuliana’s hair and makeup artist-the “talented” Emma Willis-then works her magic. In the meantime, Giuliana uses her time in the beauty chair to go over the research she has prepared for interviewing Hollywood A-listers.

Though a lot goes in to creating a show-stopping red carpet ensemble, Giuliana has proved she can certainly handle the occasional wardrobe malfunction. In fact, her self-described “biggest award show fashion emergency” didn’t happen before a show, but during one.

“We were in a commercial break, switching out the battery in my microphone pack, when suddenly the zipper on my gown split,” she recalls. “With just a few seconds left until we were back on live TV, we tried to tape the dress shut and of course that didn’t work so I had a decision to make; either hide what had just happened or share the funny story with the viewers, tape and all.”

She continues, “I chose the latter of the two and we all had a great laugh, as did the internet. Those are the moments I love. On live TV anything can happen, and it usually does.”

That’s one of the reasons she’s so excited for the return of the in person red carpet at the 2021 Oscars.

“I’ve missed interviewing people live and in person so that’s why I am really looking forward to the Oscar red carpet this Sunday since all of my interviews will be in person,” Giuliana shares. “E! is the first stop on the red carpet so viewers will have a front row seat to their favourite nominees and presenters as they arrive for Hollywood’s biggest night of the year.”