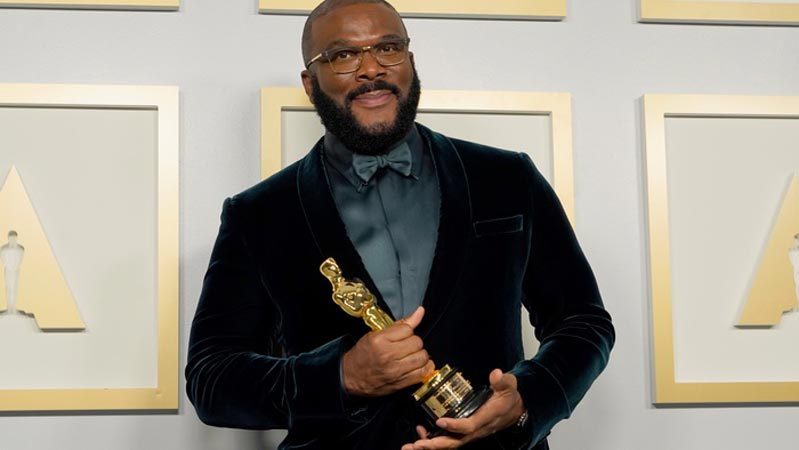 Hollywood star Tyler Perry, who has been at the forefront of the entertainment industry`s recovery amid the coronavirus pandemic, took home the Jean Hersholt Humanitarian Award at the 2021 Oscars ceremony. According to Variety, Perry was one of the first major Hollywood players to tackle the pandemic head-on, developing Camp Quarantine, a multi-step plan to get production up and running.

He resumed production in July, hosting about 360 cast and crew members on the 330-acre campus at Tyler Perry Studios in Atlanta for the duration of each project.

In the year since Perry and his team announced their quarantine bubble model, the crew produced multiple seasons of his BET series `Sistas` and `The Oval`, as well as BET Plus shows `Ruthless`, `Bruh` and the upcoming `All the Queen`s Men`.

Over the past year, Perry used his proficiency as a filmmaker to create widespread change in the community around him, with projects including BET`s “COVID-19 Vaccine and the Black Community.”

He was vaccinated on camera for that special, which included informative interviews with doctors to help destigmatize the vaccine.

The annual Jean Hersholt Humanitarian Award is bestowed upon an “individual in the motion picture industry whose humanitarian efforts have brought credit to the industry.”

The 93rd Academy Awards are being held at both the Dolby Theatre and Union Station. The ceremony is taking place two months later than originally planned, due to the impact left by the COVID-19 pandemic on the entertainment industry.