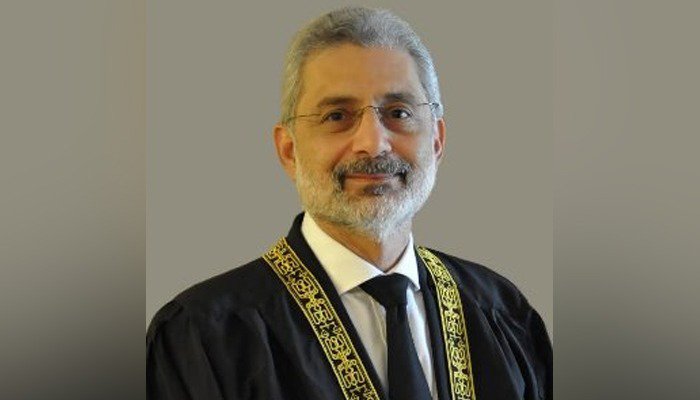 The Supreme Court on Monday accepted Justice Qazi Faez Isa’s review petitions challenging the court’s judgement on the presidential reference against him.

According to details, ten-member bench, headed by Justice Umar Ata Bandial, handed a split 6-4 verdict after all parties to the case concluded their arguments.

The apex court order said that no action could be taken against the wife and children of Justice Qazi Faez Isa. Justices Bandial, Sajjad Ali Shah, Munib Akhtar and Qazi Amin disagreed with the decision.

Justice Isa and his wife had challenged the apex court’s order on the presidential reference. The Supreme Court had initiated the proceedings over Justice Isa’s alleged non-disclosure in wealth returns of three London properties acquired on lease in the name of his wife and children between 2011 and 2015.

In June 2020, the top court quashed the reference and declared the show-cause notice issued to the judge by the Supreme Judicial Council null and void.

The court, however, ordered the FBR to issue appropriate notices to the judge’s family and children under the Income Tax Ordinance, 2001. Three judges, Justice Maqbool Baqar, Justice Mansoor Ali Shah, and Justice Yahya Afridi wrote dissenting notes in the case.

Sarina Isa said, in her review petition, that the judgement was given without hearing her viewpoint.

This is one of the rare few times when the top court has approved a review appeal against his verdict. The judgements aren’t reviewed unless there is some discrepancy in the records.