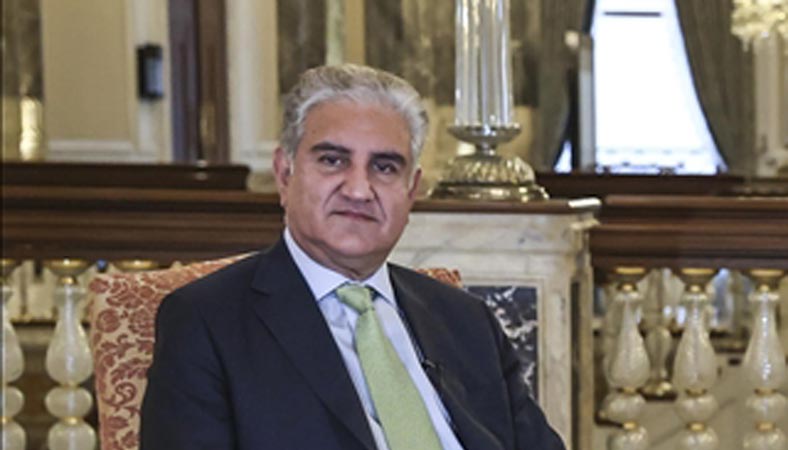 Foreign Minister Shah Mahmood Qureshi on Sunday said Pakistan would be happy to talk out differences and resolve outstanding issues through dialogue if India was willing to revisit the unilateral decisions taken on August 5, 2019.

“If India is willing to revisit some of the decisions that they took on August 5, 2019, Pakistan will be more than happy to engage, sit and talk out our differences and sit and through a dialogue resolve the outstanding issues,” the foreign minister said in an interview with Anadolu Agency of Turkey during his two-day visit there.

He said Pakistan had outstanding issues with India including Kashmir, Siachen, Sir Creek, water and other minor issues and the only sensible way forward was the dialogue.

“We cannot afford to go to war, you know, it will be mutually suicidal. And no sensible person will advocate a policy of that nature. So, we need to sit and we need to talk,” he remarked.

He said it was India, not Pakistan, which ran away from talks and suspended the composite and comprehensive dialogue.

However, he said, one recent development of recommitment to ceasefire during the conversation between the directors general of Military Operations from both sides was a positive development.

“So, when they expressed an interest in recommitment, we welcomed it. Kashmiris have welcomed it. And that has, in my view, lowered tensions and has gone well on both sides. Sensible elements on this site and on that side have welcomed this new development,” Qureshi remarked.

“So, there is some thought. It is too early to make a value judgment on that,” he remarked.

Coming to Afghan peace process, Qureshi said the stakes in the process were very high.

Regarding the US’ decision for withdrawal of troops from Afghanistan, the foreign minister said that was one of the very important demands of the Taliban during the negotiations. So, by withdrawing, the Americans have conceded to that demand, he added.

“We will certainly try and urge them (Taliban), you know, we will urge them to remain engaged and continue with the peace process, the process that started in Doha, should come to a logical conclusion through the Istanbul conference,” Qureshi remarked.

To another question, the foreign minister said Pakistan could take advantage of its geopolitical position for generating economic activity and this China-Pakistan Economic Corridor, Pakistan was providing a huge opportunity to landlocked countries like Afghanistan and the Central Asian republics.

“And we want to create a win-win situation so that everybody gains from it. You know, China gains from it, Russia gains from it, Central Asian republics gain from it, and the entire region benefits from this, and it’s not confined to just the region,” he said.

Moreover, anyone including the western countries, United States or European Union interested in coming and investing in these areas would be welcomed.

As the questioner asked what were the obstacles Afghan parties needed to overcome, the foreign minister said the Afghans should seize this opportunity, sit amongst themselves and decide what kind of a constitution they want.

He said being a neighbor, Pakistan could only help and facilitate and not make any decisions.

However, cautioning against the role of spoilers, the foreign minister said there were elements that had benefited from the war economy.

“People have made billions and there are elements outside of Afghanistan who would want Afghanistan to remain unstable because of the use of Afghan soil for their national objectives. So, recognizing that there are spoilers, we also recognize there is a huge opportunity, which should not be missed,” he stated.

Touching the bilateral relations, Foreign Minister Qureshi thanked Turkey for standing up for the cause of the Kashmiris by taking a very clear position.

Moreover, the views of President Erdogan were very close to the views of Prime Minister Imran Khan on the issue of Islamophobia. He said both Turkey and Iran were onboard and would speak to Indonesian Foreign Minister soon to seek her advice and opinion.

“Inshallah, in the month of Ramadan, when I accompany the Prime Minister [Imran Khan] to Saudi Arabia, I intend to take up this issue with the foreign minister of Saudi Arabia, so that important Muslim countries, build a consensus within the Ummah and then engage with the West, on how to tackle the issue of Islamophobia,” he said.