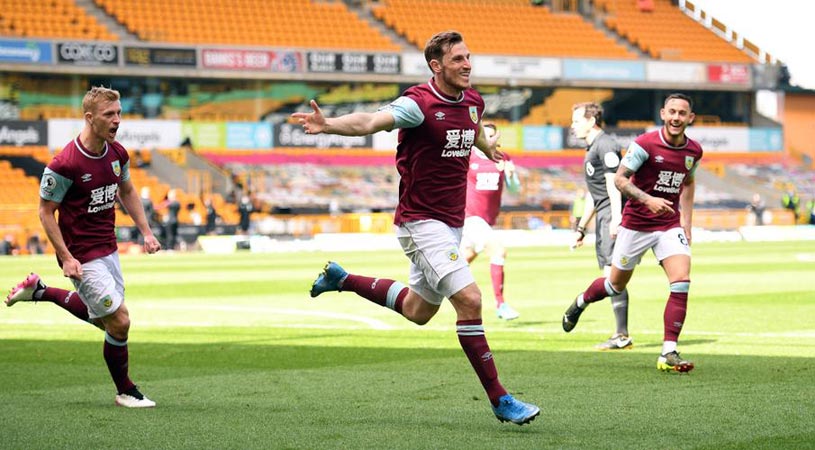 WOLVERHAMPTON: Chris Wood scored his first Premier League hat-trick as Burnley blew Wolves away with a dominant first-half performance at Molineux to take a giant step towards survival.

All of Wood’s goals in a 4-0 win came before half time during an opening 45 minutes where it was abundantly clear one team was driven by the hunger and desire of something to play for, and the other was not.

Wolves, who have known for much of the season that their fate would probably be mid-table obscurity, improved marginally in the second half in the sense that they only conceded one more goal when Ashley Westwood struck five minutes from time.

Sean Dyche’s team headed to the West Midlands in no immediate threat of relegation, despite three successive defeats, mostly due to Fulham’s inability to put any pressure on the teams above them.

They left with a nine-point cushion between themselves and the bottom three and it should be enough to ensure another season of Premier League football.

Conor Coady could be heard bellowing out instructions as the match started, demanding a fast start from his team. Initially it appeared to have worked, but ultimately it fell on deaf ears.

Daniel Podence provided some easy work for the returning Nick Pope, back after missing two games with a shoulder injury, with a shot into the goalkeeper’s midriff, before curling a shot beyond the England international which skimmed the outside of a post.

A mistake by Wily Boly allowed Burnley to take the lead after 15 minutes. Wood latched on to a pass that Boly failed to clear and turned Coady one way then the other down the right side of the penalty area before finding the far corner of the net with a powerful, low shot from an acute angle.

The New Zealander quickly doubled the lead six minutes later. Sloppy play by Adama Traore this time saw him give the ball away on the edge of his own penalty area, as Dwight McNeil intercepted his pass to Nelson Semedo.

McNeil rolled the ball across the face of goal where Wood was on hand to tap it home from close range.

Dyche had his team playing aggressive, front-foot football and Wolves were unable to cope. Burnley won yet another second ball and Charlie Taylor’s cross should have been put away by Matej Vydra but he spooned his shot over the crossbar from eight yards out.

Wolves were as sloppy and sluggish as Burnley were impressive and the hosts’ frustration boiled over seven minutes before half time.

Podence stayed down inside the penalty area after a slight push by Josh Brownhill. James Tarkowski tried to drag the striker up by his arm, sparking a melee involving both sets of players which saw Traore push Jack Cork in the face.

VAR took a look at the incident but only deemed Traore’s actions worthy of a yellow card. In the current climate, the Wolves winger could have had few complaints if the colour was red.

Wood headed Burnley’s third goal and completed his hat-trick a minute before half time, nodding home unmarked from four yards out following some more terrible defending from a McNeil corner.

Vydra rounded Rui Patricio to score what looked like a fourth goal right at the start of the second half, but VAR intervened and saved Wolves with a correct offside decision.

Burnley were not resting on their laurels and still looked a danger going forward, and Matt Lowton made Patricio make a fine save at his near post after an hour.

As good as the Clarets were going forward, defensively also they were outstanding and kept their opponents at arm’s length throughout.

Westwood completed the rout with five minutes remaining as Wood turned provider for his fierce shot from the edge of the box.