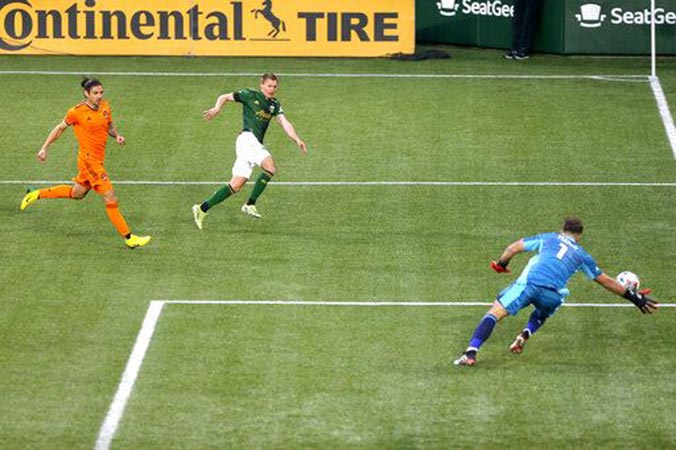 PORTLAND: Dairon Asprilla and Cristhian Paredes scored and the Portland Timbers beat the Houston Dynamo 2-1 on Saturday night for their first victory of the season.

Asprilla scored in the sixth minute to give the Timbers the lead, celebrating with a cartwheel and a backflip.

After the goal, the entire team went to the bench to hug Diego Valeri, whose father Luis died earlier this this week. Coach Giovanni Saverese wore a black arm band.

“It was a huge shock for us, so being able to dedicate this game to him (Diego´s father) was something that was super special and something that meant a lot to us,” said Timbers midfielder Blake Bodily.

Ahead of the first leg of Portland´s CONCACAF Champions League quarterfinal match Wednesday against Club America, usual starters Valeri and Felipe Mora didn´t come on until the second half.

Houston equalized with an own goal in the 27th minute when Peredes tried to deflect a pass from Tyler Pasher. Pasher returned to MLS this year after three seasons with Indy Eleven in the USL Championship.

Paredes broke the stalemate with a goal for the Timbers off a pass from Mora in the 73rd minute. Both Paredes and Asprilla hadn’t scored since 2019. “Happy to score my first goal, I know last year wasn´t my best season, but it is important for me to come back this season and score, and (show) how I´m going to help the team moving forward,” Paredes said. Dynamo coach Tab Ramos said he addressed Portland’s lineup changes before the game.

The Timbers dropped their opener last week to the Vancouver Whitecaps, 1-0 in Utah. The Dynamo beat the San Jose Earthquakes 2-1 at home in the opening weekend.

Before the game, the Timbers unveiled the banner for last summer’s title in the MLS is Back tournament, played in a bubble in Florida.

The game was played before a limited number of fans for the first time since last March when the 2020 was suspended because of coronavirus.

“It feels closer and closer to normality, seeing the fans with the scarves and the national anthem. The way they supported us throughout the entire match, the passion that they bring to the stadium, I mean it’s the soul of this game, it’s the soul of our club and today the support was phenomenal and its not even yet a full stadium,” Savarese said. Timbers have a 8-5-5 advantage in the all-time series against the Dynamo.