Karunaratne 234no and De Silva 154no as draw beckons 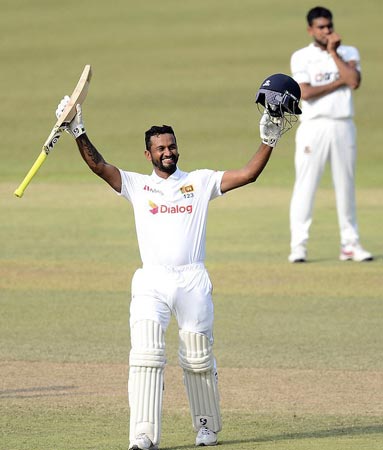 Sri Lanka and Bangladesh were heading for a high-scoring draw in the first test after the host finished day four on 512-3 on Saturday in reply to Bangladesh´s 541-7 declared.

Skipper Dimuth Karunaratne was 234 not out and Dhananjaya de Silva on 154 not out when play was called off early due to bad light and 22 overs were lost. Play will resume early Sunday.

Karunaratne and De Silva carried their bats through a wicketless day to extend their partnership to 322 runs.

Sri Lanka began the day trailing Bangladesh by 312 runs, and by stumps had reduced that to just 29.

Karunaratne has batted through the Sri Lanka innings for his maiden double century, 11 hours so far. He has been on the field for all four days – a total of 1,443 minutes.

“Dimuth is a little bit fatigued, but it´s a nice fatigue,” Arthur said. “He´ll be stiff in the morning, but he can resume tomorrow and who knows where he gets to. The initial goal this morning was to have parity by the end of play today. We´re in a really good position.

“We scored at a good rate,” he added. “The partnership was good this morning. They absorbed the new ball spells well, and then scored quite freely. They´ve run well between the wickets and I´ve loved the intensity.”

Karunaratne, who turned 33 on the first day of the match, was slow off the blocks and survived some nervous moments. When he was on 98, Bangladesh reviewed after a leg before wicket appeal was turned down. He reached three figures by flicking Taskin Ahmed to midwicket for two and his 11th test hundred.

The left-hander was in full flow after the milestone, coming down the pitch and lofting the spinners and, at one point, he even reverse paddled Taijul Islam to the vacant third man region for four. De Silva, meanwhile, was hardly troubled as he hit some cracking shots. With good use of his feet against spin, he didn´t allow Taijul or offspinner Mehidy Hasan to settle, and Bangladesh failed to stop the boundaries. After lunch, Sri Lanka went past the follow on score of 341 and cut loose. De Silva went on to compile his seventh test hundred. By stumps, he’d batted for more than six hours and faced 278 balls with 20 fours.