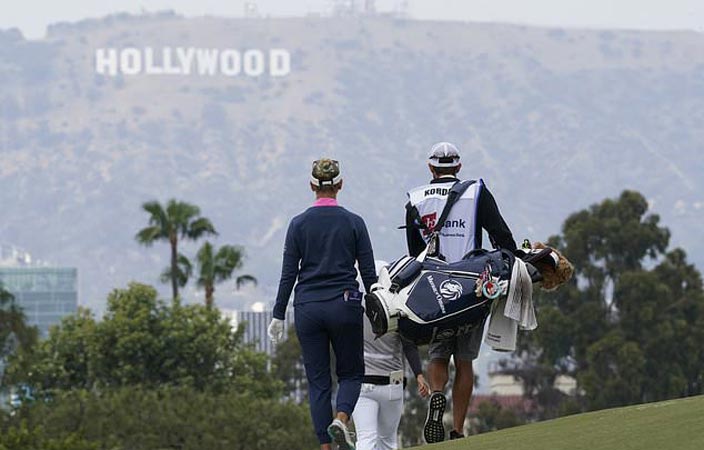 Jessica Korda rode out a series of big momentum shifts Friday at historic Wilshire Country Club to hold onto the lead in the HUGEL Air Premia LA Open. Six strokes ahead after three holes, tied with top-ranked Jin Young Ko at the turn and two shots back with three to play, Korda birdied the final two holes to take a one-stroke lead into the final round.

“I´m just trying to be patient,” Korda said. “It´s tough. It´s tough to win out here. Still have 18 holes left and I just want to give myself an opportunity to win.”

Korda shot a 3-under 68 to break the tournament 54-hole record at 16 under. She matched the event course record with a 64 on Wednesday and shot a bogey-free 65 on Thursday to break the 36-hole scoring record at 13 under.

“Honestly, it´s just hitting it in the right spots,” Korda said. “Pins were definitely tougher today than they have been the last two days, more tucked, so it was hard to be aggressive on a lot of them.”

Ko shot a 66, making a 30-foot bogey putt on the par-3 18th after driving over the green and watching her second bang into the bank and roll back to her feet.

Korda matched Ko with a two-putt birdie on the par-5 15th, then hit to 3 feet for a birdie on the par-4 17th and to 2 feet on 18. “I knew that she was going to come out and play great,” Korda said about Ko. “That´s what she does being world No. 1. You wouldn´t expect anything less. I was just trying to play my own game, and that´s exactly what I´m going to try to do tomorrow.” She won the season-opening Diamond Resorts Tournament of Champions in January for her sixth LPGA Tour title.