Masood urges Ulema to work for peace, harmony in country 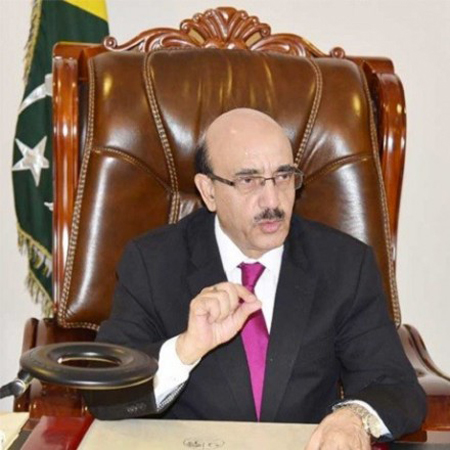 The Azad Jammu and Kashmir (AJK) President Sardar Masood Khan has urged Ulema and Mushaikh to work for peace and harmony in the country.

He was addressing a small gathering of Ulema at an Iftar dinner hosted at the President House. The president said that Ulema and Mushaikh are role models for the masses and they should give direction and provide leadership to build a just and equitable society.

“Creation of such a society can be possible only by following and enforcing the golden principles which the great Prophet Hazrat Muhammad (peace be upon him) had set fifteen hundred years ago, and resultantly, several countries in the world followed these principles in order to establish a welfare states later,” he asserted.

The state president said that besides playing a prominent role in the Pakistan movement and the Kashmir liberation struggle, the religious scholars of our country had always played a leading role in the national crises including the ongoing novel corona pandemic.

He called upon the religious scholars to counter enemies’ propaganda designed to paint Islam as a religion of extremism. “What kind of this religion of extremism is that hundreds of thousands of its followers have been martyred during the last 15 to 20 years, and their killers claim themselves to be peace-loving people,” he astonished, adding that powerful media and psychological operations were in full swing to dehumanized the Muslims as terrorists, extremists and violent in order to block spread of Islam all over the world.

The AJK president asked the religious scholars to guide the Muslims keeping in view the present day challenges, and highlight various aspects of Islamic socio-economic and political systems so that the Muslim youth are able to play their role in the renaissance of Islam and turning the world into a haven of peace and prosperity.

He maintained that several Western countries had adopted high values of the Islamic welfare society in order to ensure progress and prosperity. In these societies, he added, the tax is collected from the people and spent on providing education, health and social security to the people thereby creating peace and balance in the society. He appealed to the religious scholars to continue to educate the people about the measures to prevent coronavirus.