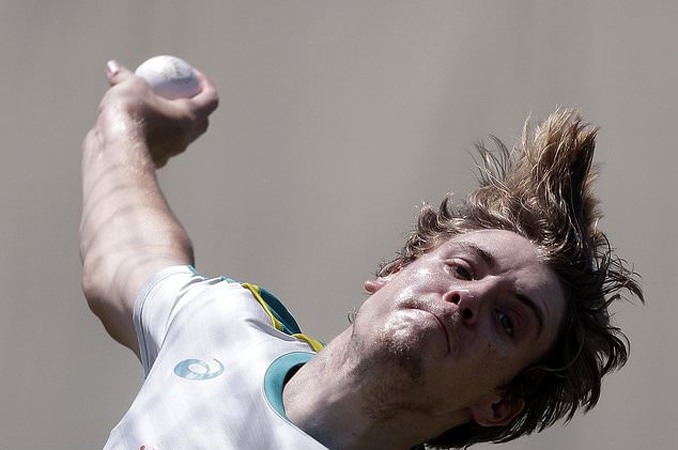 Allrounder Cameron Green has been given his first full contract with Cricket Australia after playing all four tests against India and leading the domestic first-class competition with 922 runs at an average of almost 77 and three centuries.

Not so lucky were former test vice-captains Travis Head and Matthew Wade, opener Joe Burns and allrounders Mitchell Marsh and Marcus Stoinis, who were not among the 17 players to receive 2021-22 national contracts announced Friday.

“Cameron is a player we believe will play an important role for Australian cricket after his impressive breakout summer,” national selectors chairman Trevor Hohns said. “His 84 in the second-innings against India at the SCG (Sydney Cricket Ground) demonstrated excellent technique and resolve and we are confident his bowling will be impactful at international level.”

Up-and-coming opener Will Pucovksi, who is recovering from shoulder surgery, missed out on a central contract after making his test debut last season. Steve Smith, David Warner and Marnus Labuschagne the only test regular specialist batters on the list.

“What we´d like to see from Will is he gets fully fit, back on the field and scores some runs,” Hohns said. “If he´s doing that then I have no doubt he´ll feature quite prominently in our discussions.”

Hohns said spots in the batting order would be available for in-form players, and contracts could be upgraded during the international season.

“There´s no secret that there´s positions available,” he said. “We´re challenging our players to really put their hand up again at the start of next season.

“There is a considerable amount of international cricket to be played across all formats in the next 12 months and the door to national selection is never closed.”

Hohns said Australian men´s teams were in a good position for success across all three formats.

“We applaud the players for the professionalism and commitment they displayed in incredibly challenging circumstances last year, which involved hard quarantines and many months in biosecure hubs,” Hohns said. “While the Border-Gavaskar Trophy was deservedly won by India, our players can nonetheless be proud of their efforts across all formats.

Smith, Labuschagne and Warner are all ranked among the top 10 test batters, and Pat Cummins, Josh Hazlewood and Mitchell Starc are rated in the top 10 fast bowlers.

Test captain Tim Paine was one of two wicketkeepers on the list, with the other being short-form incumbent Alex Carey.

Australia will be hosting an Ashes tour by England starting in November or December following the Twenty20 World Cup.