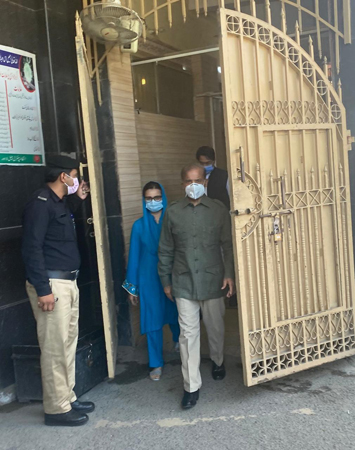 Leader of the Opposition in National Assembly Shehbaz Sharif was released from jail on Friday, after nearly seven months of captivity in a money laundering and assets beyond means case.

After the Lahore High Court (LHC) issued the former Punjab chief minister’s bail orders, his lawyer Azam Nazeer Tarar deposited surety bonds in the accountability court. After reviewing the bonds deposited by the PML-N leader, the LHC issued his release orders after which Shehbaz was allowed to leave prison.

PML-N leaders had announced that they would not carry out any protest or rally to celebrate Sharif’s release due to the coronavirus pandemic.

On Thursday, Justice Ali Baqar Najafi, who headed the bench, had announced a short order in the open court with Justice Aalia Neelum and Justice Syed Shahbaz Ali Rizvi also present. “For the reasons to be recorded later and with consensus, we admit the petitioner to post-arrest bail subject to his furnishing bail bonds in the sum of Rs 5 million with two sureties each in the like amount to the satisfaction of the learned trial court,” read the short order signed by all three judges.

At the outset of the hearing, NAB special prosecutor Syed Faisal Raza Bokhari had referred to a statement of Advocate Azam Nazir Tarar, the counsel for Sharif, about a split decision previously issued by a division bench in the bail petition of the opposition leader. Tarar had stated that it was unfortunate that a division bench initially allowed the bail petition and later issued a split decision. The counsel said he had never witnessed a change in an announced decision in his 27 years of law practice.

The NAB prosecutor had said the counsel’s statement amounted to contempt of court and he should take his words back. However, Tarar said he stuck to his stance and wondered whether the prosecutor wanted the bench to initiate contempt proceedings against him. Bokhari insisted he could establish that the statement fell within the definition of contempt. The bench, however, asked the prosecutor to start his arguments in the petition. Bokhari argued that Sharif had accumulated massive assets in the names of his family members as benamidars.

The PML-N president was arrested on Sept 28, 2020, after the LHC had refused to further extend his pre-arrest bail. He was first granted an interim pre-arrest bail on June 3 last year. He remained in NAB’s custody for 23 days till the trial court sent him on judicial remand on Oct 20, 2020.