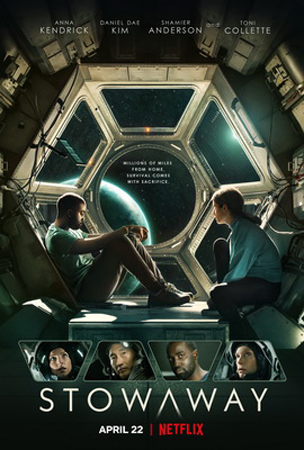 As Joe Penna’s “Stowaway” blasts off to Mars in its opening moments, we quickly learn the archetypes of the anxious astronaut trio at its centre: Dr Zoe Levenson is the energetic one, Commander Marina Barnett is the cooly collected one and Dr David Kim is the quiet one. Bound together by their mutual intellect and excitement for their two-year mission, they make a solid team. Everything is going just fine – except, that is, for the unexpected fourth member of their mission, an unconscious and injured stranger, stuck up inside a vital piece of machinery and dripping blood onto the space station floor. Such is the fascinating conceit of “Stowaway,” a nerve-shredding space thriller that starts strong before falling prey to blunter dramatic twists, few of which are as thrilling as the original idea that sets everything in motion.

The film’s opening act is an impressive one, with Penna only improving upon the skills that made his last feature, the similarly chilling adventure drama “Arctic,” such a riveting watch. Penna, who wrote the film’s screenplay alongside his “Arctic” collaborator Ryan Morrison, has a real knack for marrying the mundane and the disorienting. Strong performances by Penna’s talented cast only aid in crafting an immersive, intriguing opening act. It’s capped off by the arrival of the eponymous stowaway: ground engineer Michael, who tumbles out of an essential piece of life support machinery, injuring both Marina and the ship in the process.