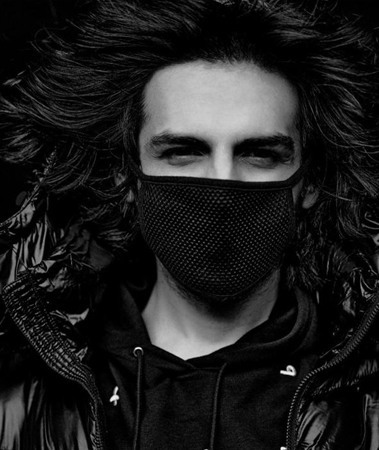 Bollywood actor Kartik Aaryan has finally made an appearance on Instagram after a period of silence after he was dropped from Karan Johar’s upcoming film ‘Dostana 2’ as per an official announcement.

The controversial news left many fans in shock and confusion and some even blamed ‘nepotism’ as the reason behind his replacement in the film.

The issue had blown up into a huge controversy as fans tried to guess the real reason behind Karan Johar and Kartik Aaryan’s fallout.

Meanwhile, Kartik had remained away from the controversy and kept a low profile on social media.

However, he recently made a comeback on social media with a black and white picture of his new look resembling the main character from the game ‘Assassin’s Creed’. He was seen with long flowy hair, wearing a black hoodie and leather jacket on top. The ‘Pati Patni Aur Woh’ looked dapper with his mask on while staring intensely into the camera.

In the caption, he simply put an emoji of a masked face.

Many fans left comments on his post asking him how he is and expressing their joy after seeing his presence online. One user wrote, “Finally you posted” while another said, “Itne time baad post kiya yaar I was so tensed.”

Meanwhile, Kartik had remained away from the controversy and kept a low profile on social media

Earlier, on April 16, reports emerged that the nation’s current heartthrob Kartik Aaryan had been replaced from Karan Johar’s much-talked-about ‘Dostana 2’. The big update on Dharma Productions venture had left his fans shocked. So much so that #KartikAaryan was trending big time on social media when the news had emerged.

Later, film trade analyst Sumit Kadel took to Twitter and confirmed the news. He wrote: #Dostana2 UPDATE – #KartikAryan has been replaced by Dharma Production due to some professional reasons, some other actor will be casted in replacement of Kartik.

Dostana 2 was announced in 2019 by Karan Johar. The film stars Janhvi Kapoor in the lead role with newbie Laksh Lalwani along with Kartik.

No official statement about Kartik Aaryan’s replacement from the film has been made by the production house as yet, neither the actor has spoken anything on it.

The romantic comedy film is directed by Collin D’Cunha and produced by Hiroo Yash Johar, Karan Johar and Apoorva Mehta under Dharma Productions. It is a sequel to the 2008 release ‘Dostana’ co-starring Priyanka Chopra, Abhishek Bachchan and John Abraham.