Jahangir Tareen claims he has support of 40 PTI lawmakers

* Says his group will only meet PM, not any committee
* Court extends bail of PTI leader, son till May 3 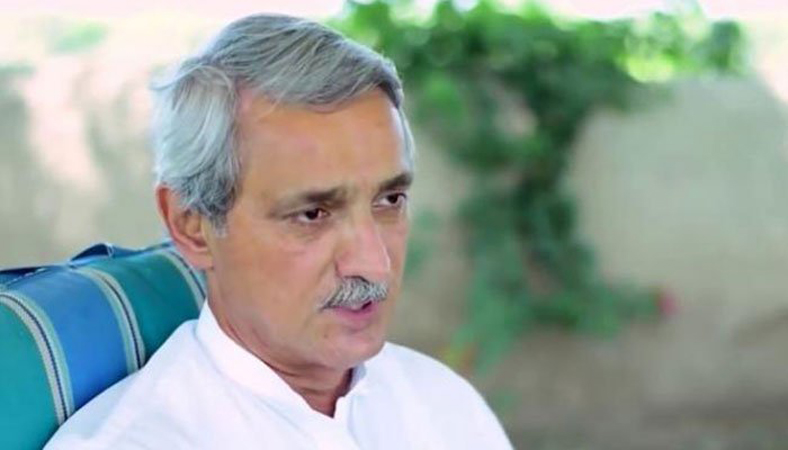 Estranged PTI leader Jahangir Tareen on Thursday claimed having the support of 40 lawmakers and said that his group will meet only Prime Minister Imran Khan, and not any committee.

“When I stood with Imran Khan, PML-N investigated my businesses and sent me notices,” Tareen said at a press conference outside the sessions court in Lahore. “But what they [PTI government] did with me was not even done by the PML-N,” he lamented, adding that a civil case has been turned into a criminal one.

The PTI leader said that the cases against him pertain to the Federal Board of Revenue (FBR) and the Securities and Exchange Commission of Pakistan (SECP), not the Federal Investigation Agency (FIA).

To a question about a committee formed to address his grievances, Tareen said that he has heard about it on TV. “I have said that we will not meet any committee, we will only meet Prime Minister Imran Khan,” said Tareen, adding that he has been assured of a meeting between his group of supporters and Prime Minister Imran Khan ‘in a few days’. “A day before, some individuals from Islamabad contacted me and said that our group would have a meeting with the premier in a few days. Our entire group will meet the prime minister soon,” said Tareen, adding that his relationship with the premier is not ‘weak’.

Tareen said he would “definitely get justice from the court”. However, he remained silent when prompted on whether those who had “conspired” against him would be successful.

When asked about a meeting between one of his supporters and Chief Minister Punjab Usman Buzdar. “All friends who are called for a meeting with the CM, first ask me and take advice from the group and then go,” Tareen said in response.

Speaking alongside Tareen, provincial minister Noman Langrial said that he had met with Punjab Chief Minister Usman Buzdar who had mentioned and praised Tareen. “The chief minister recognised Tareen’s services for the PTI,” he said, adding that he had called upon the chief minister to play his role in the matter. He said he was “reassured that the matter would be resolved”.

Before the media talk, Tareen and his son Ali appeared before a sessions court for a hearing. During the hearing, Tareen’s lawyer told the judge that his clients were cooperating in the investigation. He added that his clients were also providing proof to the investigating authorities in the money laundering allegations. “We hope that we will be exonerated,” said Tareen’s lawyer. He added that they are hopeful that the FIA would backtrack on their allegations.

“There are three FIRs against Tareen and his son, Ali Tareen,” said the sugar baron’s counsel, Barrister Salman Safdar, adding that the FIA had only registered two cases after a period of four-and-a-half months. He said that according to the FIA, the case in the banking court should also be transferred to this court.

Barrister Safdar said that both individuals were appearing in the FIA’s investigation and that there were charges of fraud and money laundering against Tareen. “The FIA should clarify in court whether they are removing the money laundering provisions against Tareen or not.” He also requested the court to adjourn proceedings in the case to after Ramazan due to the current coronavirus situation in the country.

Meanwhile, the FIA’s investigation officer told the court that they were investigating all the allegations and shared the available record with the court. Upon hearing this, the court reviewed the file and gave it back to the FIA for further investigation. “Where is the complete inquiry report? It should be presented right now,” said the judge.

The investigation officer told the judge that the inquiry report is confidential. The judge after hearing this, extended the bail of the two till May 3 and ordered the FIA to present the complete report in the next hearing before adjourning the case.