Punjab police is proud of Martyrs and Ghazis who fought valiantly in front of the protesters: IG Punjab 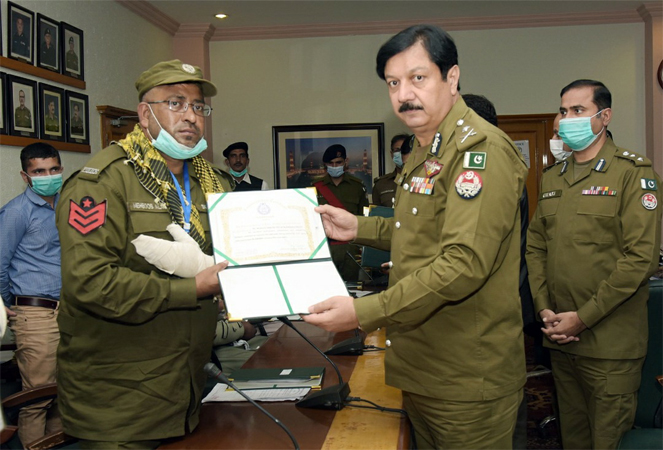 Inspector General of Police (IGP) Punjab Inam Ghani on Thursday said that during the violent protests of the banned outfit, Punjab Police personnel have proudly raised a new history of bravery, duty and perseverance.

The police chief said the determination and patriotism of the Punjab Police is being fully appreciated at both the governmental and public levels today.

He expressed these views while addressing a ceremony at the Central Police Office here today. During the ceremony, IG Punjab distributed Rs. 500,000 each and CC-1 certificates to 11 injured Lahore and Sheikhupura police personnel. IG Punjab visited all the injured one by one and gave them cash prizes and certificates of appreciation while the officers present at the function applauded and paid homage to the services of the brave personnel.

Addressing the ceremony, the IGP said that the martyrs and Ghazis of Punjab Police who bravely protected the lives and property of the people by standing firm in front of the protesters have proved that protection of life, property and honor of the people is our first priority and this doesn’t matter if our lives are lost in the line of duty.

He further said that despite the violent actions of the miscreants, the protection of life and property of the people and upholding the writ of the state was the priority for which the IG Punjab is grateful to the entire force including the martyrs and Ghazis and due to their bravery, sense of duty, diligence, dedication and patriotism have served us well in front of both the government and the people.

He said that DIG Welfare has provided best medical facilities to the officers and personnel undergoing treatment in all the hospitals of the province who were injured during the sit-ins while the government is also approving a case of financial assistance as soon as possible to encourage these brave wounded officers and personnel.

Addressing the injured personnel, the IG said that just as the brave martyrs are the foreheads of the Punjab Police, so are the Ghazis who were injured while performing their professional duties and steps shall be continued for their best care and welfare in the future.

Hailing the martyrs and Gahzis of police force, he noted that ceremonies would be organized in their districts to encourage the injured officers and personnel across Punjab where they would be awarded cash prizes and certificates of appreciation.

Among the personnel who were awarded at the ceremony were Lahore Police Head Constable Imran Shehzad, Constable Ghulam Ali and Constable Muhammad Afzaal while ASI Ajmal Ata, Mehboob Alam, Tariq, Adeel Sabir, Muhammad Khalid, Khurram and Tariq were from Sheikhupura Police. Talking to the officials, the IG Punjab said that all the officers and personnel severely injured irrespective of posts have been equally encouraged so that the morale of the force remains high and they remain active to perform their duties with more enthusiasm.

During the ceremony, prayers were also offered for the elevation of the ranks of martyrs of Punjab Police and speedy recovery of the injured.