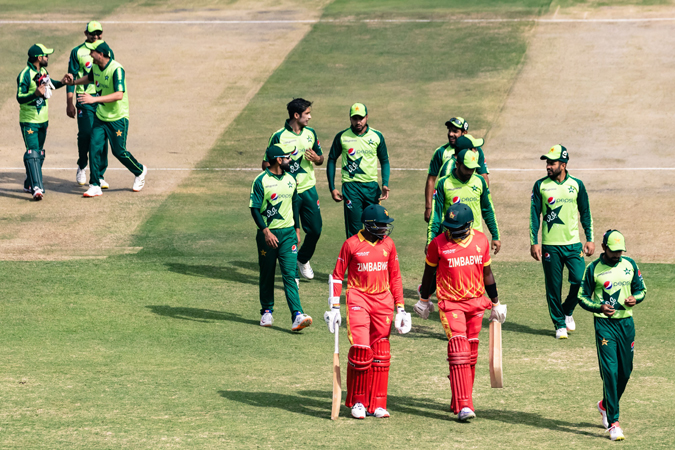 HARARE: After a neck-to-neck encounter in the first T20I, Pakistan will be confident going into the second match on Friday (today). Zimbabwe found themselves in a commanding position during different phases of the game in the first match of the three-match series. Despite a controlled bowling performance, fielders and batters failed to back them and Pakistan outclassed them in the bowling department. The hosts will fancy a chance at restoring parity in the second game as Pakistan’s middle order is struggling to fire, resulting in the team being heavily dependent on the openers Babar Azam and Mohammad Rizwan to do the majority of the damage.

Remember the last time: Rizwan’s single-handed efforts of unbeaten 82 from 61 balls to help Pakistan reach a competitive total of 149/7 gave the visitors a fighting chance to make a comeback with the ball. Zimbabwe’s Tinashe Kamunhukamwe (29), Craig Ervine (34), and Luke Jongwe (30 mot out) resurrected the hopes of a victory before Usman Qadir foiled their plans as he triggered a middle-order implosion. He returned 3-29 while Mohammad Hasnain (2-27) also took important wickets. Pakistan came out on the top with an 11-run win to go 1-0 up in the series. Pakistan opener Rizwan said: “There is always a home conditions advantage but we have world-class bowlers who have adjusted really well to the changed conditions from South Africa. The batters too have an idea of the pitch performs and hopefully we will post a huge target in the next match.” Zimbabwe captain Sean Williams said: “It is inexcusable the number of catches we dropped which ultimately cost us the game. We need to improve our fielding. We will go back to the drawing board and improve better in the next game.”

Brendan Taylor missed the last game with a gastrointestinal infection but should be fit to return in the second game. Unfortunately, Craig Ervine will miss out, not just this game but the series, after picking up a right calf muscle strain while fielding during the first match. Tarisai Musakanda has been called up as his replacement. Pakistan rested Shaheen Afridi and Hasan Ali in the previous game, and just about got away with that. And the question of whether they trust themselves to back their secondary bowlers ––- as much as what they can a misfiring middle order – remains.

The weather should be clear once more, and similar conditions are to be expected as in the first game. The sides would be playing on a fresh pitch, though. Sean Williams needs a further 64 runs to become just the second Zimbabwean to reach 1000 T20I runs, with Hamilton Masakadza well clear at the top with 1662. Rizwan’s lead at the top of the T20I run charts this year already stands at 108 runs – he has 426 to the second-placed Martin Guptill’s 318. Rizwan also averages 106.50 with the bat in T20I cricket this calendar year.