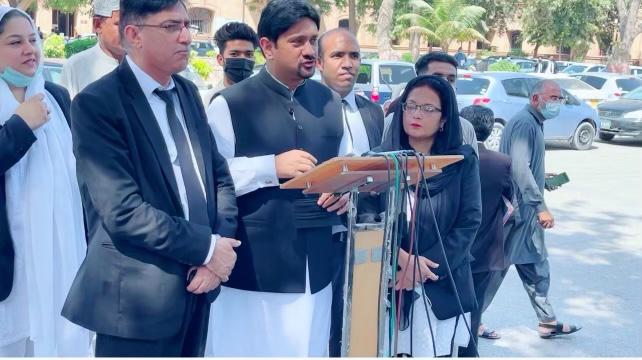 Sindh Police acts as proxy and private servants of Sindh Government, and are deployed only to cause harm to those who expose the corrupt practices of Pakistan Peoples Party and a select group of their fraudsters said PTI leader Samir Mir Sheikh

Addressing the media at Sindh High Court after this JIT Petition hearing, PTI leader Samir Mir Shaikh expressed his disappointment in the lack of morality in the Institution of Sindh Police.

Further, Samir Shaikh said that IGP Mushtaq Maher only takes orders from the Provincial Government and has no inclination towards providing a safe haven to the civilians or any members of opposition within the province.

While talking to the press, Mir said that he was always certain that there would be personal backlash after he resigned from PPP and exposed heir corruption but he didn’t realize that Sindh Police acts as an extension and private security of PPP and will engage in political vendetta. He said that he will make sure to go the whole nine yards to get justice for the illegal arrest and political victimization he faced, which was carried out by a “few black sheep” of the Sindh Police, even if it means approaching the Supreme Court.

Shaikh told the media of the torture and assassination attempts he faced while custody of the Sindh Police, while his only crime was that he had raised his voice against wrongful practices in Sindh. He told the press that the incidents he was arrested in were false as he was not even present at the scenes of the alleged crimes.

Shaikh said it is extremely disheartening for the common man to see a well-known political person be treated this way by an institution which had the first and foremost duty to uphold the law and protect the citizens. He pointed out the various ways in which Sindh Police has been a part of covering up crimes for PPP and becoming their proxy for carrying out victimization and that is why they are not seen as trustworthy by the citizens.

In conclusion, Samir Mir Shaikh said that his legal team will make sure to get his case thoroughly investigated by the petitioned JIT so the offenders can be punished.