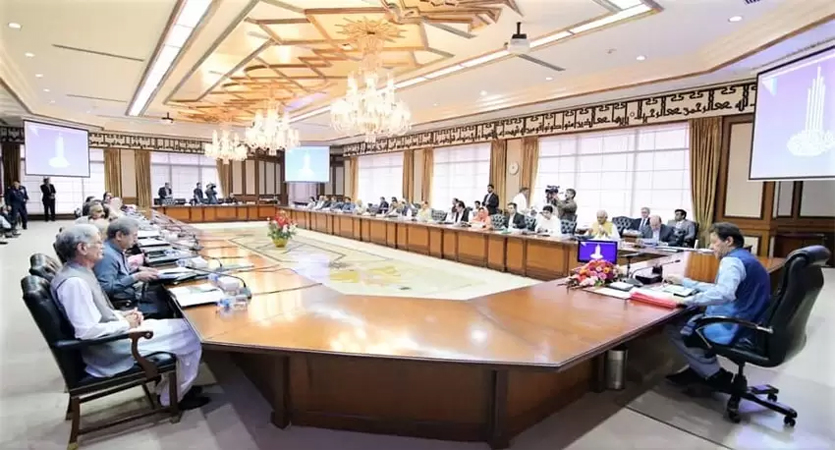 The Federal Cabinet, in order to ensure timely decisions about basic food items in the country, demand and supply, assessment of prices, transportation and further strengthening of cooperation between the federal and provincial governments, Tuesday approved the establishment of a Centralized Database.

Prime Minister Imran Khan presided over the cabinet meeting, which also accorded an in-principle approval to the proposed law for the establishment of Centralized Database.

The meeting welcomed the inclusion of Shaukat Tareen as finance minister in the cabinet.

The prime minister stressed for early completion of the process for electronic voting machine and the right of vote to the overseas Pakistanis. The meeting was briefed about the progress made so far in that respect.

Imran Khan also apprised the cabinet of the progress on negotiations with the banned Tehreek-e-Labbaik Pakistan (TLP).

The cabinet, in order to ensure effective implementation of the United Nations Security Council Resolution 1540 about control on the export of goods, technology and instruments related to nuclear and biological weapons, and ensuring more effective implementation of the Government of Pakistan’s commitment to check the spread of Weapons of Mass Destruction (WMDs), approved the delegation of some powers to the Strategic Export Control Division (SECDIV) so as to enable it make timely decisions in that regard.

Members of the Board of Governors for National Institute of Child Health Karachi included Dr Ahsan Rabbani, Prof Dr Waseem Qazi and Amir A Allahwana.

Members of the Board of Governors for Jinnah Postgraduate Medical Center Karachi included Dr Imtiaz A Hashmi and Prof S Tipu Sultan.

Muzammail Rasheed was appointed as Member of the Board of Governor for PIMS Islamabad.

The cabinet, while keeping in view the requests made by the United Nations Assistance Mission (UNMA) in Afghanistan and United Nations Children’s Fund (UNICEF), allowed the transportation of few containers from Karachi to Kabul.

The cabinet approved appointments of Khalid Hamid as Chief Executive of National Insurance Company and Zaheer Abbas as Managing Director OF Pakistan Bait-ul-Mal.

It also approved signing of a Memorandum of Understanding (MoU) with Iran for establishment of markets at Pakistan-Iran border.

The cabinet also granted its approval for inclusion of representatives of the consumers in the Board of Directors of ten power distributing companies. These representatives would be from the civil society.

It also granted its approval on the decisions taken on March 31 in the meeting of Cabinet Committee on Institutional Reforms.

Advisor to the Prime Minister Dr Ishrat Hussain presented recommendations of the committee regarding volume of the Federal Government (in terms of employees), working mechanism, manpower in different ministries and departments, and their rationalization. The cabinet was apprised that currently about 955,000 employees had been working in the Federal Government, out of them, during 2019-20, 565,000 employees were working in the secretariat and attached departments whereas 390,000 employees had been working in autonomous, semi-autonomous and corporations.

The cabinet was further informed that out of the total number of employees, 95 per cent were working in grade 1-16 and their salaries cost 80-85 per cent of the total expenditures.

The ratio between (employees) officers and staff stood around 1:20 and in the secretariate, it was 1:6.

The cabinet was further informed that in the years 2010-11 to 2016-17, the total number of government employees was 829,000 whereas in the year, 2016-17 alone, suddenly 137,000 employees were inducted in the secretariat and attached departments of the Federal Government whereas 21,000 inductions were made in the autonomous bodies.

Among these employees, about 35 per cent were working in security, law and order, civil armed forces, 20 pc in the infrastructure services, railway, postal, aviation, highways, 18 pc in energy sector, 5 pc in social sector, 5 pc in commercial and taxation, 12 pc others in data, training, research and judiciary etc.

In the ministries, the ratio between officers and employees stood around 1:4.

The Federal Cabinet was apprised that in the rationalization efforts under the present government, about 28 billion rupees had been saved so far. In this regard, it was decided that through e-filing and e-office system, the ratio between the officers and staff would be brought down to a target of 1:3 under different phases. The meeting also accorded its approval to the decisions taken on April 7 and 14 during the meetings of Economic Coordination Committee.