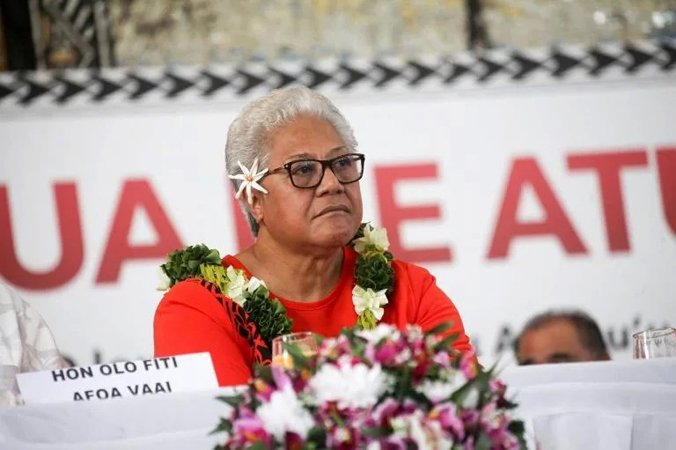 Fiame Naomi Mata’afa, a veteran powerbroker with ties to royalty, has taken the starring role in a Pacific island political drama that could see her unseat one of the world’s longest-serving democratic leaders and become Samoa’s first female prime minister.

In a plot twist that would have been unthinkable a year ago, the 64-year-old’s fledgling FAST party came from nowhere to win 25 seats in the 51-member parliament in elections earlier this month.

With a sole independent set to determine its outcome, Mata’afa will need to be at her persuasive best during negotiations as she seeks Samoa’s first change of government in almost 40 years. But even if her leadership bid fails, the woman once referred to as “the devil” by current Prime Minister Tuilaepa Sailele Malielegaoi, has succeeded in transforming Samoan politics. Malielegaoi’s Human Rights Protection Party has ruled since 1982 and he has been in charge for 22 years.

Mata’afa, who served as his deputy before resigning last year, has helped forge a viable opposition in just nine months, ending decades of Samoa operating as a one-party democracy.

She has also put women front and centre in a region where politics has traditionally been a male preserve — Hilda Heine of the Marshall Islands is still the only woman to have lead a Pacific island nation when she was president from 2016-20. “I don’t think it’s just (becoming) prime minister, it’s in any field… The message for women, particularly young women, is that once you open the door you can do this,” she told New Zealand broadcaster TVNZ.

The rise of Mata’afa’s FAST Party may appear to have happened overnight, but its leader has been in parliament for 36 years.

Her family are part of the tama-a-‘aiga — Samoa’s royal lineage — and have been steeped in the island nation’s political life for generations. Mata’afa’s grandfather helped draft Samoa’s constitution and her father was the nation’s first prime minister after independence from New Zealand in 1962. Her mother also served as a lawmaker and diplomat. After graduating from Wellington’s Victoria University, Mata’afa entered parliament in 1985, representing the same Lotofaga electorate her father and mother had previously held.

She was an integral member of the HRPP government, becoming Samoa’s first female cabinet minister in 1991 and has held several portfolios including education, women, social development, justice and environment.