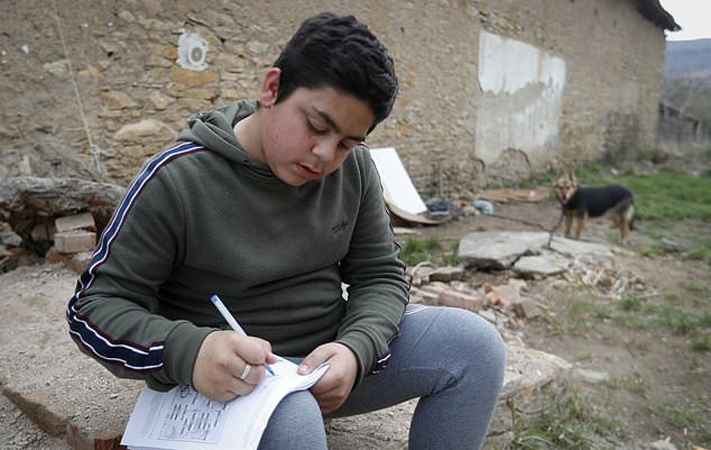 Mihaly Horvath, a 12-year-old in a village in northeastern Hungary, can’t wait for his school to reopen.

As a devastating COVID-19 surge swept Hungary in the spring, classes were suspended and students were ordered to study online. But Mihaly’s family, part of Hungary’s large Roma minority, doesn’t have a computer or internet access at their home in Bodvaszilas, and he says he’s falling behind in his lessons as a result.

“Some students have telephones, some have computers. But there are others like me who don´t have either,” he said from the yard of a dilapidated house where he lives with nine other family members. “It´s more difficult for Gypsy kids like us. Some don’t even have writing utensils or anything else.”

His is one of thousands of Roma families in Hungary that have been particularly hard hit by the pandemic. Many already marginalized Roma adults lost work as Hungary’s economy buckled under coronavirus lockdowns, pushing their families deeper into poverty. Some have reported selling their belongings, like mobile phones, to make ends meet.

Karmen Bastyur, Mihaly’s great aunt, said most of the Roma children in Bodvaszilas don´t have access to digital devices and aren´t completing printed homework assignments given out by the school.

“There´s no help for them. (Mihaly) can´t take advantage of online education since we don´t have a computer,” she said. “It would be easier because he could talk with his teacher who could help him with homework that he doesn´t understand.”

According to an August 2020 survey by the National Democratic Institute, a US-based nonprofit organization, only 41% of Roma households in Hungary have access to both cable and mobile internet and 13% report no access to the internet at all.

A November 2020 report from Hungary´s deputy ombudsperson for national minorities acknowledged that for Roma children from poor families, “the transition to digital education multiplied their already existing disadvantages.”

Mihaly’s relatives, like many Roma, rely on seasonal work or informal day labor for income. But business closures and other pandemic restrictions have caused them to lose work, leading to deeper impoverishment and food insecurity.

David Vig, director of the rights group Amnesty International Hungary, said the state has done little to help such workers, who were ineligible for unemployment benefits or wage support when their jobs disappeared.

“There is zero labor protection for those who work in (day labor),” he said. “Any COVID-related state support, if you don´t have an official (work) contract, is not there.”

Roma make up nearly 10% of Hungary´s population, according to some estimates, and many live in one of the 1,300 segregated slums across the country.

Bodvaszilas is located in one of the least-developed regions in the 27-nation European Union. It’s GDP per capita was only 40% of the EU average in 2013, according to Eurostat.

The local municipality provides one hot lunch to school-age children each weekday, in place of the free meals students normally receive at school. But Mihaly’s family still struggles to put enough food on the table.

“Sometimes me and my husband don´t eat and rather leave the food for the children,” said Bastyur, who lives with Mihaly in the three-bedroom house along with children, grandchildren and cousins.

Two weeks ago, the family was told that the small, decaying house they rent had been sold and they must be out in a month or police would be called to evict them.

“He told us to clean up the yard, clean the house, remove all our furniture and leave. But we don´t know where to go,” Bastyur said.