* Both actors announced the death of the family matriarch, who appeared with several of her kids on the A&E reality show 'Wahlburgers,' on their Instagram pages on Sunday 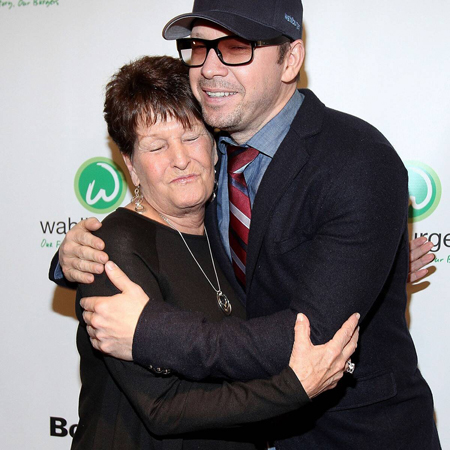 Alma Wahlberg, mother of Mark Wahlberg and Donnie Wahlberg, has died. She was 78. Both actors announced the death of the family matriarch, who appeared with several of her kids on the A&E reality show Wahlburgers, on their Instagram pages on Sunday, April 18. Alma died following a long battle with dementia.

“My angel,” wrote Mark, who is 49 and her youngest child, alongside a throwback photo of a smiling Alma. “Rest in peace.”

Donnie, 51, shared a heartwarming, professionally edited tribute video to his mother, showing her at various events and moments with her family.

“I’m so blessed to have been brought into this world by, raised by, taught by and set on my life’s path by, such an amazing woman,” he wrote. “My mom Alma’s joy for life, love and people – combined with a pride in her humble beginnings and refusal to forget where she came from – undoubtedly shaped me into the man that I am.”

He continued, “I’ve often said, if you like anything about me, I got it from Alma. I say that, because it’s true. She was, without a doubt, the most loving human being I’ve ever known. I never heard her say, or do, anything disrespectful to anyone. She was, as anybody who ever came across her knows, true blue.”

In addition to Mark and Donnie, Alma is survived by sons Arthur Donnelly, Paul Wahlberg, James Wahlberg and Robert Wahlberg and daughters Michelle Donnelly and Tracey Marcarelli and more than a dozen grandchildren and several great-grandchildren.

‘My angel,’ wrote Mark, who is 49 and her youngest child, alongside a throwback photo of a smiling Alma. ‘Rest in peace’

In 2010, Paul, the head chef behind the Wahlburgers burger eatery franchise, opened a restaurant named Alma Nova in Hingham, Massachusetts in honour of his mother.

Alma is preceded in death by her daughter Deborah Donnelly-Wahlberg, who died at age 43 in 2003 on the same day Mark and wife Rhea Durham welcomed their daughter Ella Rae, the eldest of their four children. Alma’s ex-husband, Donald Wahlberg, died at age 77 in 2008.

“Like so many moms who struggled, overcame odds, made something from nothing and pulled off the impossible for their children, she never complained,” Donnie continued in his tribute to his mom. “She did what needed to be done, most often, with a smile. She made the best of times in the worst of times.”

He continued, “That was Alma – mother, sister, daughter, grandmother, friend, ally, warrior, angel. She made no apologies for who she was, but never put herself above anyone else. She kicked our butts if we messed up, kicked anyone else’s butts if they messed with us. Taught us right, made us pay the price when we were wrong. She was the epitome of the word grace.”

Decades ago, Alma worked as a bank clerk and nurse’s aide to make ends meet and after she split from her husband Donald in 1982, she relied on welfare butter and cheese to feed her kids.

“I invented the craziest meals. English muffin pizzas, that was the big treat,” she told NBC’s Today show in 2018. “I had no choice. I had to find them something to eat.”

Alma also said that Donnie credited her for the success of his ’90s boy band, New Kids on the Block, saying, “He said to me, ‘You know Ma, if it wasn’t for you, there probably wouldn’t be any New Kids because you encouraged us. You were pushing us.’ And I was.” In his Instagram post, Donnie recalled how as a young boy, his mother would invite him to sing her favourite song with her-Odyssey’s 1977 rock track “Native New Yorker”-as she cleaned their home.

“There’s no doubt that the two of us singing into a mop stick, while disco dancing on our ‘sparkling’ linoleum floor, helped inspire the dreamer in me – just like the dreamer in her,” the Blue Bloods actor wrote. “Her other favourite song, If I Could by Regina Belle, is the song that she danced with each of her children to, at their weddings. I surprised her at mine by having Ms Belle sing it to her. I did so because, despite the fact that my mom could do many of the things mentioned in that beautiful song, she still wondered if she’d done the job of being the best mother she could be. Today, I say with tremendous certainty, and gratitude, she absolutely did.”

Donnie added, “It’s time to rest peacefully, mom. I love you, miss you, thank you and will celebrate you, today and always. Forever – your Baby Donnie #RIPAlma.”

In July 2020, he posted a photo of himself wearing a face mask and hugging their mother. He wrote, “I know that so many of you have asked how my mom Alma is doing. During my visit, she didn’t remember much, and was often confused, but somehow she was still Alma. She still lights up a room. She still made me smile. She’s still stubborn. And she still loves her baby Donnie. I thank you all, for your well wishes. Sending my heartfelt love, and sincerest wishes, to all those away from their loved ones. That you will be together again. Love you all so much. See you soon.”